Red spice chicken bites, gochujang elote, and a Dancing Firecracker (drink)?! One Disneyland spot has it ALL! 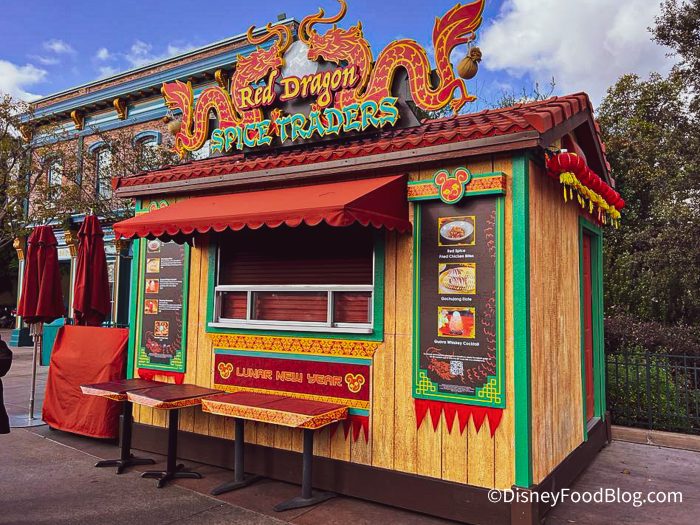 The Lunar New Year festival runs from now through February 15th, 2023 in Disney California Adventure park, so you don’t have long to enjoy it all! There’s NEW food to check out, tons of drinks to try, entertainment to enjoy, and (of course) merchandise to pick up. For now, we’re sticking to eats and drinks and checking out the NEW additions that have arrived at the Red Dragon Spice Traders booth! 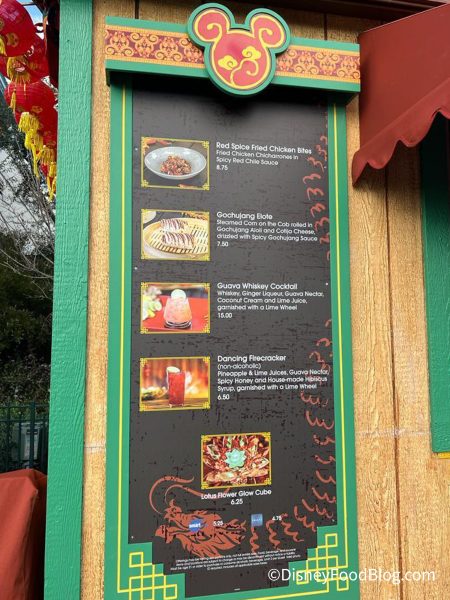 Starting with the food, the menu includes a NEW Gochujang Elote dish. This is made with steamed corn on the cob rolled in gochujang aїoli and cotija cheese drizzled with spicy gochujang sauce. It’s priced at $7.50. We’ve seen some pretty epic corn creations in Disney, so we were EXCITED to try this.

This is SUCH a fun twist on elote, and wasn’t too overly spicy! If you’ve ever had regular street corn, it was basically the same but with the gochujang flavors and kick! Definitely worth a try if you’re a fan of street corn and spice. 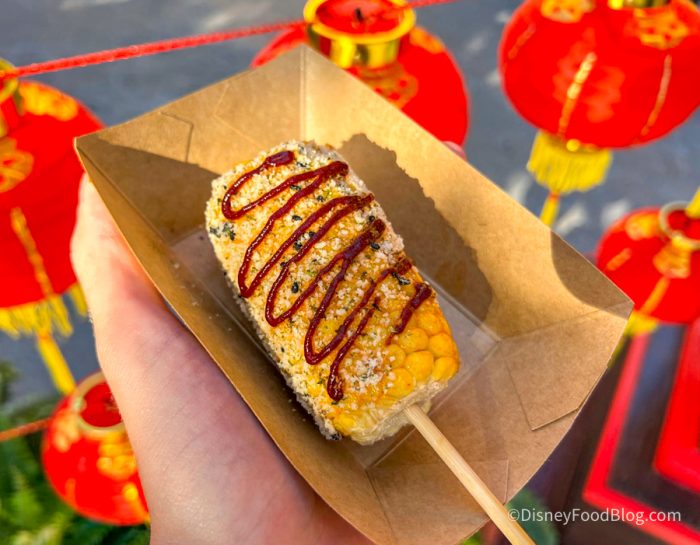 Oh boy — the chicken definitely had that kick we were looking for! It’s crispy and had such a delicious spice flavor aside from the heat level. The more you eat, the more your lips burn, but it wasn’t so spicy that would couldn’t finish our entire plate. Plus, there is quite a bit of chicken with this dish. 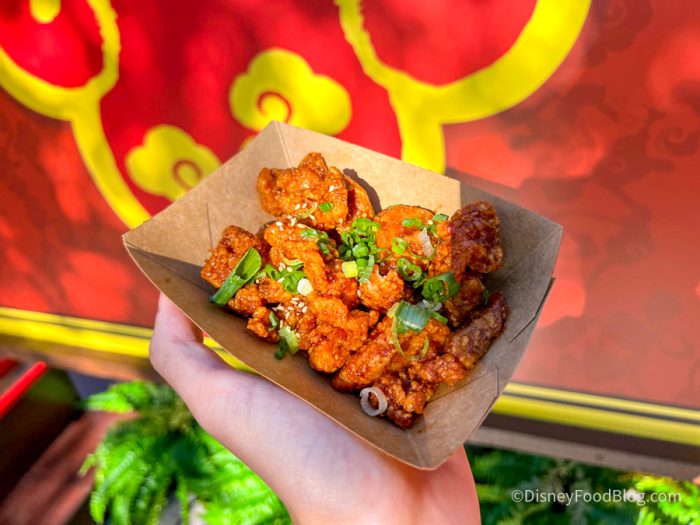 Now, let’s talk about the drinks!

New this year is the Guava Ginger Whiskey Cocktail. It has whiskey, ginger liqueur, guava nectar, coconut cream, and lime juice and is garnished with a lime wheel. It can be yours for $15. This was delicious — just make sure you stir it well before you take a sip. We had a surprising swig of whiskey on our first sip. It was fruity, well-balanced, and not overly sweet which is rare for a Disney cocktail. 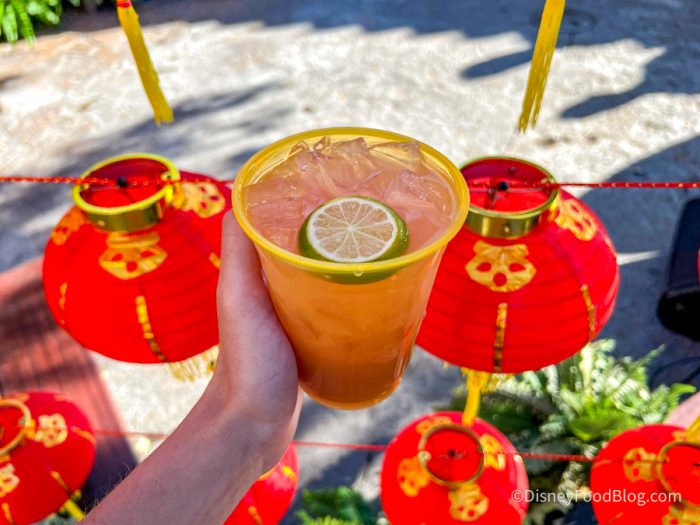 Next up is the non-alcoholic Dancing Firecracker. This is made with Pineapple and lime juices, guava nectar, spicy honey, and house-made hibiscus syrup garnished with a lime wheel and is priced at $6.50. Though this has been identified by Disney has being “new” we actually had a very similar if not identical drink back in 2022. The only differences are that the drink in 2022 was made with guava puree (instead of nectar), spicy honey syrup, and lime juice (as opposed to just a lime wheel). Still, it was mostly the same! 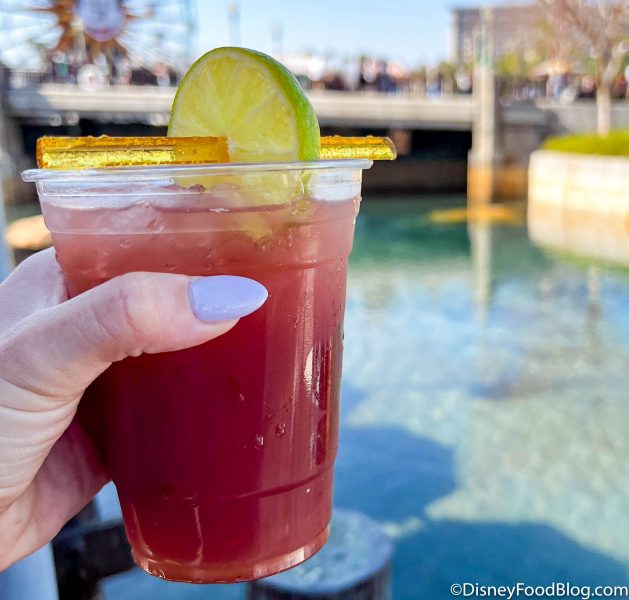 In 2022, we found that version to be super fruity and really tasty with a bit of a kick at the end from that spicy honey! That kick can really surprise you if you aren’t waiting for it, so be prepared for that. The guava was the predominant flavor and we only got a hint of that pineapple flavor. If you like light drinks with a bit of spice, we felt like this could be a good pick.

When we got this in 2023, we felt the same way! We didn’t taste as much of the spicy honey as we were hoping for, but it was still one of our favorite drinks we had all day. It wasn’t too sweet, but nice and fruity! 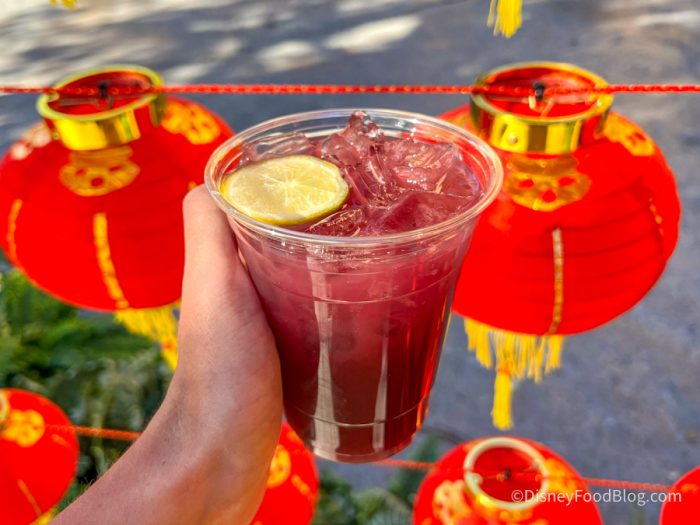 The last item available here is the Lotus Flower Glow Cube. It’s a little glow cube item you can find at a variety of booths. It costs $6.25 and there is a limit of 10 per guest, per transaction.

Overall, if you want some corn rolled in spicy sauce, red spice chicken bites, and even a drink with a bit of spice to it — this is your place. Basically, it’s spice heaven, for those who want it! This might even be a Best Booth of the Fest for us. We enjoyed all the new items we tried and would definitely recommend stopping by Red Dragon Spice Traders if you’re looking for a kick!

We’ll be sharing full reviews of ALL of the food booths so stay tuned for more details.

Which of these menu items would be your favorite? Tell us in the comments!