There are LOTS of great things to eat this year at the EPCOT International Festival of the Arts! 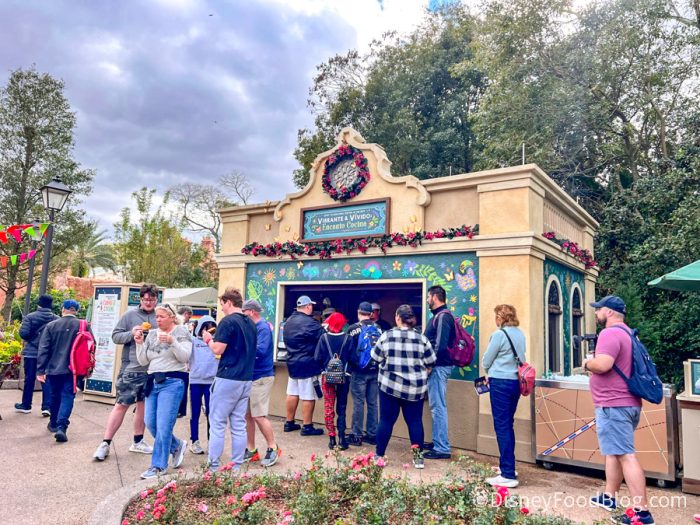 Seriously, we had a hard time choosing which booth was our favorite, and there were plenty of standout items on the menus this year. But if you’re arriving at the park before 11AM, you might have a hard time getting some festival eats…except for at one special booth! Vibrante & Vivido is offering a breakfast menu during the festival, and we’re heading over to try it out.

This booth is inspired by Disney’s Encanto, and it offers a menu with authentic Colombian cuisine during the lunch and dinner period. But during breakfast, you can check out the Breakfast Empanada! 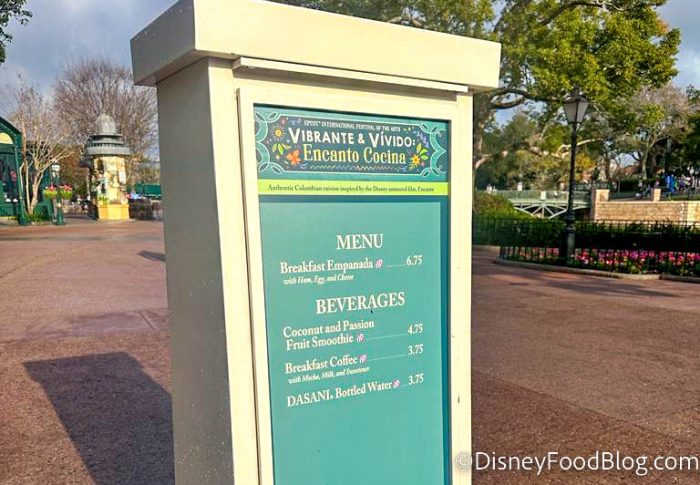 And that’s not all — they also have some beverage selections, including “Breakfast Coffee.” These selections are only available before 10:30AM each day, and we’ve seen them sell out of the empanada in the mornings. Let’s see if it’s worth the hype!

To start, we’ve got this Breakfast Empanada for $6.75. It’s filled with ham, egg, and cheese. Basically, an omelette in empanada form! 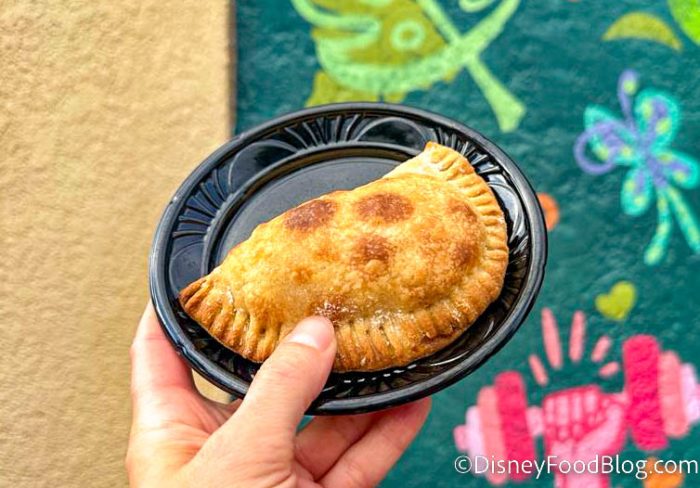 The crust on this was flaky and delicious, and it was cooked to a perfect golden brown. Sometimes you get items like this that are overcooked and get tough on the outside, but that wasn’t the case here! The eggs were soft and fluffy and their subtle flavor mixed well with the cheese. 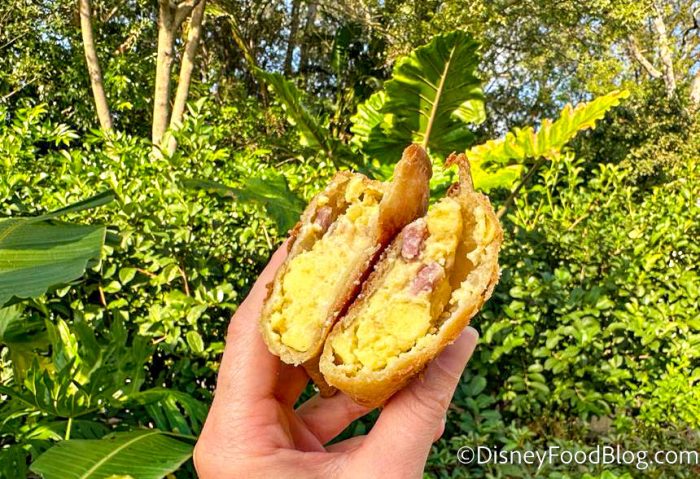 The ham was the perfect amount of salt for this item, and it added a little chew in-between bites of the egg. Honestly, the spot-on textures are what make this empanada GREAT!

For our beverage, there’s the Breakfast Coffee for $3.75. The menu says it’s made with mocha, milk, and sweetener. 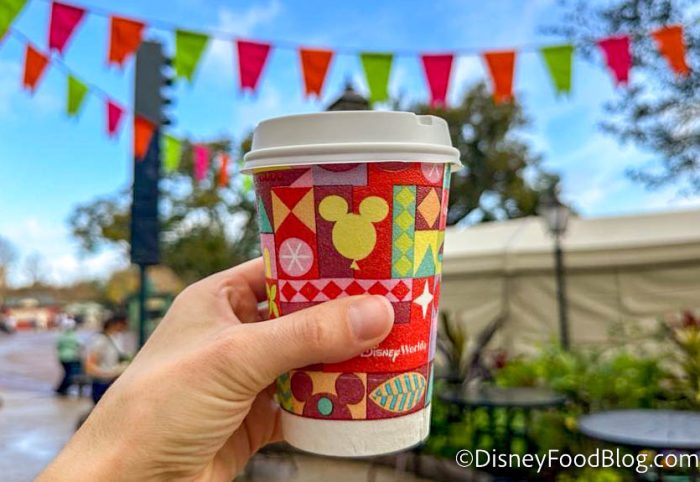 To be honest, we were a little disappointed with the size — it wasn’t filled all the way to the top. As far as taste goes, it reminded us of hot chocolate, mostly mocha-forward with a slight bitterness from the coffee. 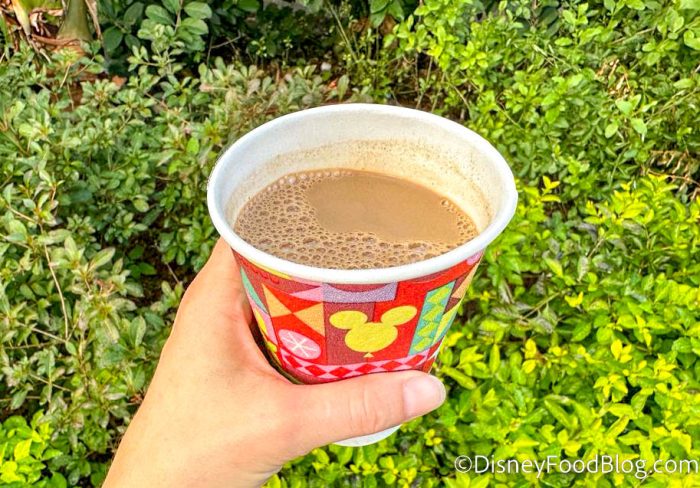 It has a really creamy texture, but not so much that it felt like you had too much milk in your coffee. It’s a little on the sweet side if you’re typically ordering your coffee black.

So should you hustle all the way over to the back of the World Showcase to get these breakfast items before 10:30AM? If you’re hungry and you’ve got a hankering to try out something new, then yes! The empanada is a pretty basic egg-ham-cheese concept but it works well, and the coffee is a good pick-me-up to start your day. You could get a similar vibe with a drink and breakfast sandwich from the Starbucks at the front of the park (Connections Cafe), but you can likely get it here with a much shorter line. 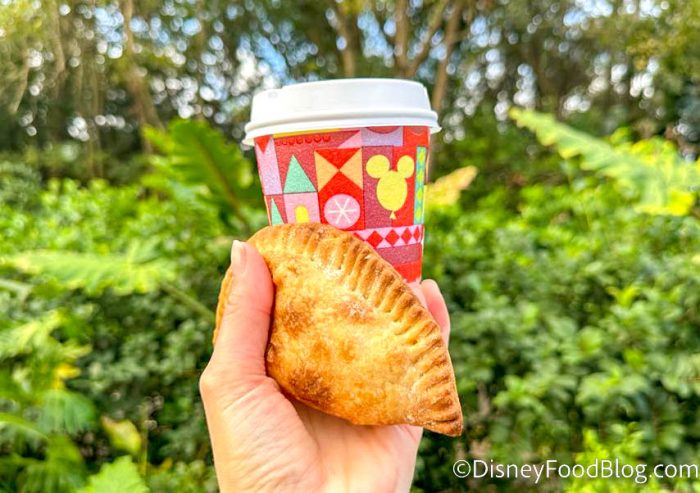 However, it’s quite a hike to the back of the park (this booth is located between France and Morocco) if you’re not already planning to ride Remy’s Ratatouille Adventure first thing in the morning or enter through International Gateway, so you’ll want to budget your time wisely. Since this is only available before 10:30AM, do you really want to spend the time marching back here when you could be rope-dropping rides instead? That’s up to you.

In EPCOT and need breakfast? This breakfast empanada with ham, egg, and cheese is at Vibrante & Vivido Encanto Cocina! pic.twitter.com/ujqRiWz1YM

We’ll continue to be on the lookout for any festival news or updates in the coming weeks as we celebrate all the arts! There are plenty of things to do at the festival this year from entertainment to activities, so make sure to check out our Festival of the Arts pages to learn more.

Click Here to See All Our Festival of the Arts Reviews!

Would you try this breakfast? Tell us in the comments!

The post How EPCOT’s Delicious New Breakfast Could MESS UP Your Park Day first appeared on the disney food blog.