If you’re a Disneyland Magic Key Holder, you are probably already taking advantage of some of the perks that come with membership.

You can get exclusive merchandise, access to an exclusive lounge for food and drinks, special treats, and more. However, going into 2023, that Magic Key will soon get you even MORE, and we’ve got all the details!

There will also be some new food coming to Magic Key Terrace, including Barbecue Short Rib Sliders and Mint Julep Cocktail.

For those Magic Key holders who purchase the Disney 100th Anniversary Popcorn bucket, refills will only cost $1.50 through February 12th, 2023. They’ll also get a special 100th anniversary print, as well as a free button if they book the Walt’s Main Street Story Guided Tour.

For the first time, Magic Key holders will also have a chance to buy an exclusive Magic Key charm by Pandora. They’ll also get two special Disney Magic Shots with free downloads at the parks from January 9th through 19th, 2023. 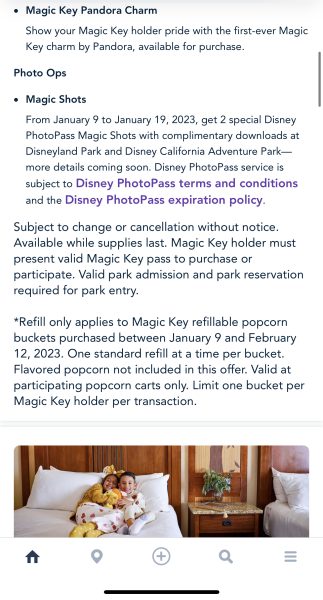 Although Magic Key passes went on sale again November 16th, 2022, they were paused again just a day later and remain paused. However, if you have an existing Magic Key pass, you will be able to renew it.

Are you a Disneyland Magic Key Holder? What do you think of these perks? Let us know in the comments!