There’s a lot going on in Disney World right now! 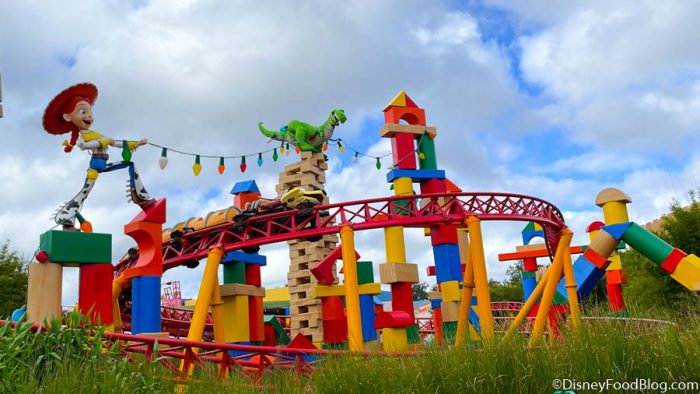 The 2022 EPCOT International Food and Wine Festival will be starting soon (in just a few days, as a matter of fact!), character meet and greets are returning left and right, and there’s also some ongoing construction projects. Today, we’re heading to Disney’s Hollywood Studios to bring you what’s new from the park!

Let’s head over to Toy Story Land and take a look at how the construction is moving along there! The gift shop for Toy Story Mania is currently being renovated, which makes the exit for the ride a little complicated. 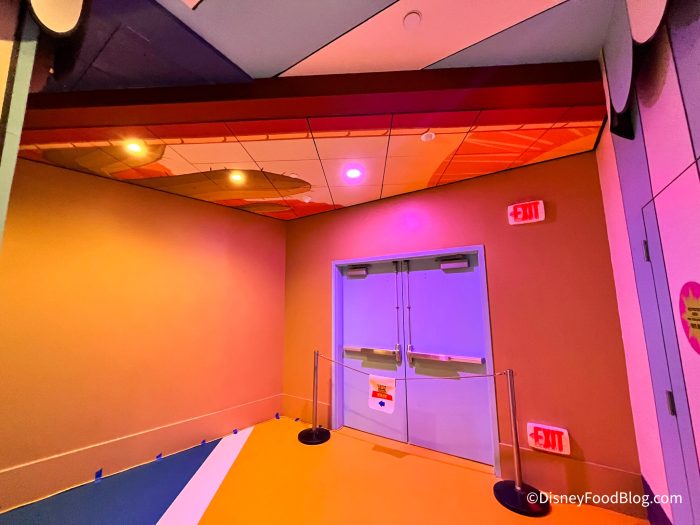 You’ll have to follow a bit of a detour!

Just keep following the arrows on the ground… 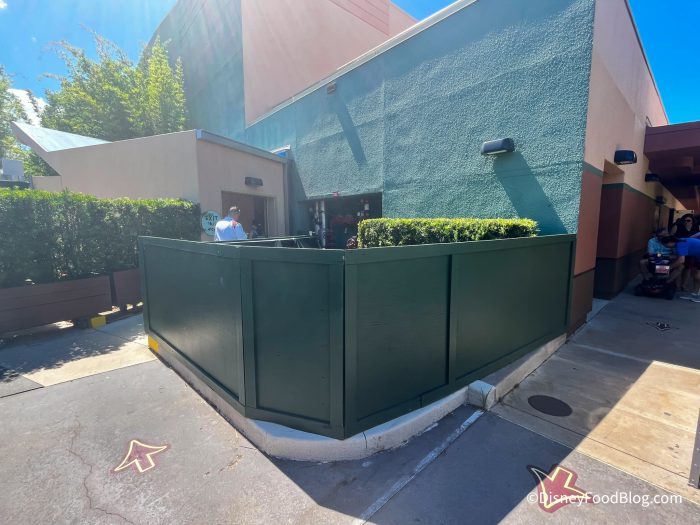 …and you’ll pass some construction walls when you make it to the exit! 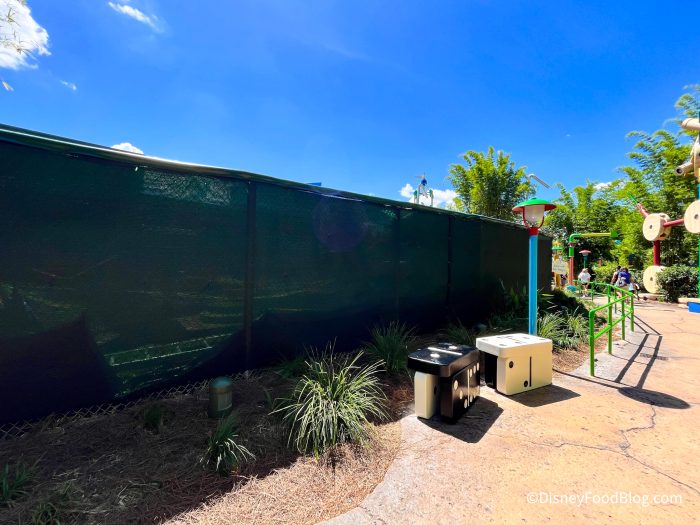 We also headed over to where the new sit down restaurant, Roundup Rodeo BBQ, will be. The construction is all happening behind a wall, so it’s hard to see what kind of progress is being made. 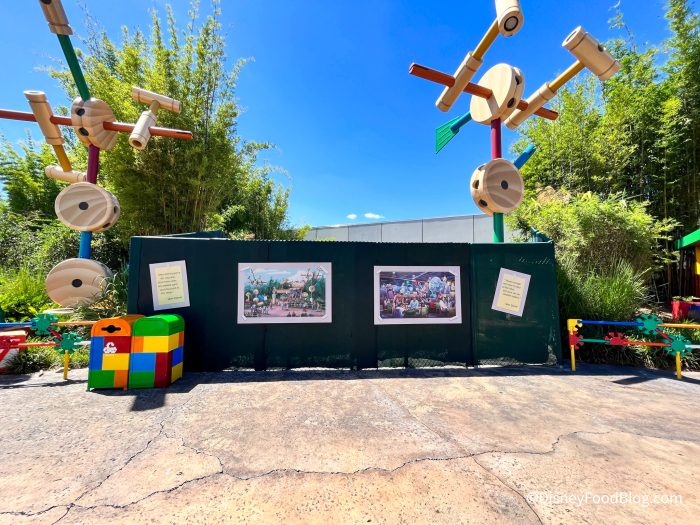 It’s hard to see what kind of progress is being made!

Disney hasn’t shared a specific opening date for Roundup Rodeo BBQ, only that it will be opening in 2022.

Click here to read EVERYTHING we know about the new restaurant coming to Toy Story Land!

Let’s start by heading over to Galaxy’s Edge and check out what Dok-Ondar has in stock at his Den of Antiquities! First up is this Plo Koon Lightsaber. Plo Koon was a Jedi that made appearances in the Star Wars prequels, as well as the Clone Wars series. This is one of the legacy lightsabers and is $159.99. 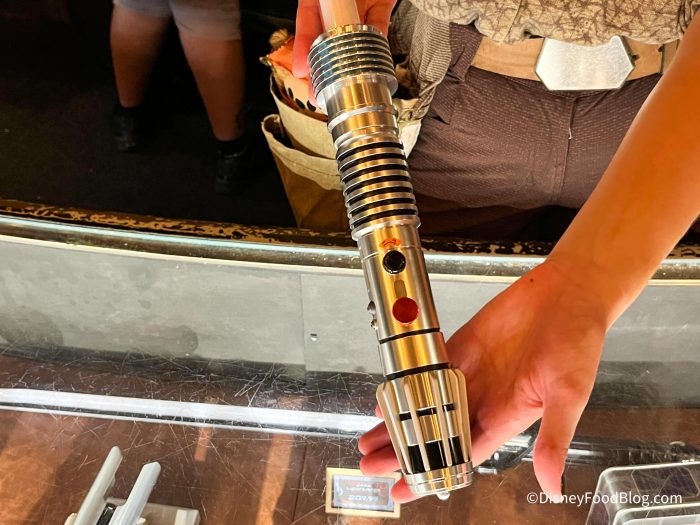 Looking for some space fashion? You can grab this wrap dress (that sort of looks like Rey’s outfit in the movies) for $99.99. 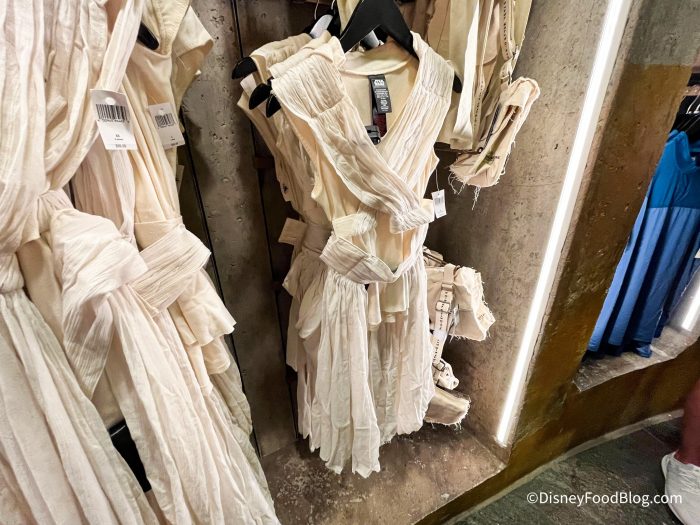 You can also snag the arm wraps Rey wears in the movies for $24.99. 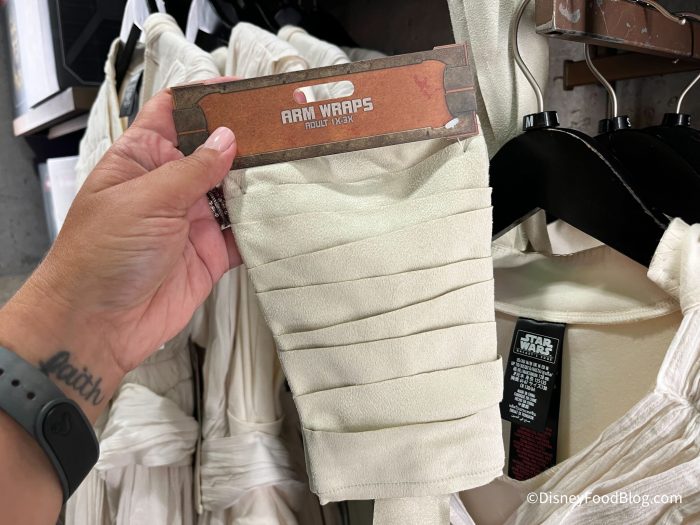 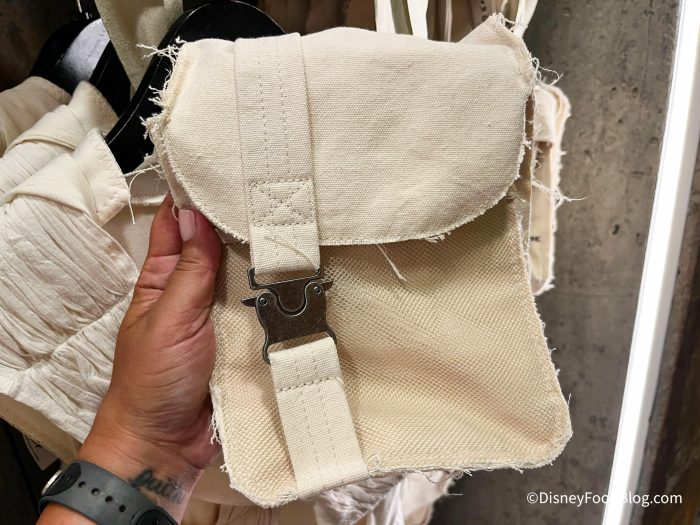 We also saw this belt that is brown with lots of detail, like the circle in the center and the beaded charms hanging from it. It is $79.99. 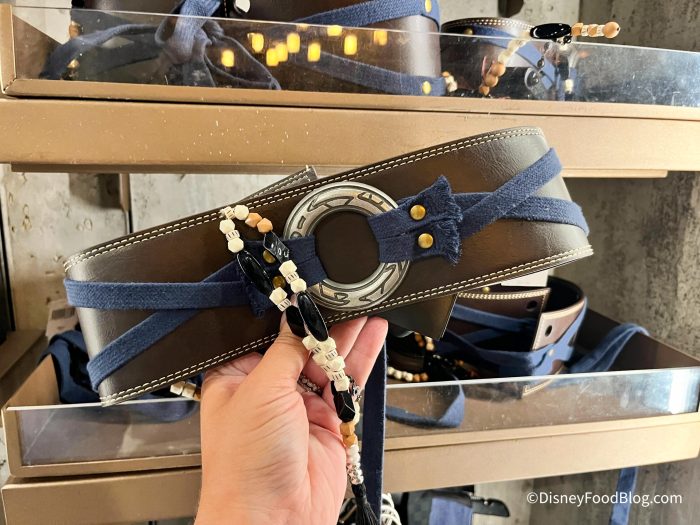 Want to look even more like a Black Spire Outpost local? Check out this vest! It’s blue and gray and available for $79.99. 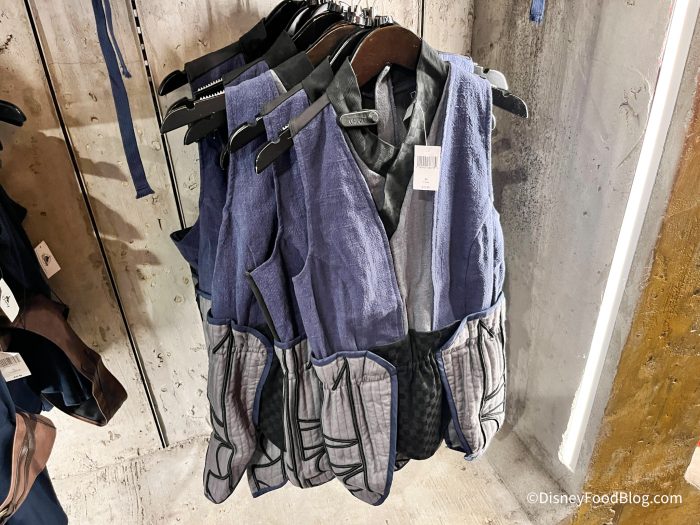 You can also get this shoulder guard that has a symbol that looks like it belongs to the Galactic Empire. You can have the shoulder armor for $19.99. 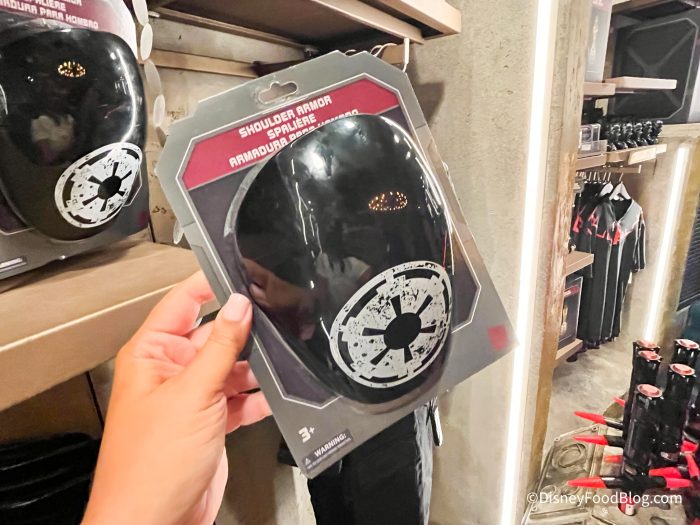 And finally from Dok-Ondar’s, we have this Ahsoka 2D art. 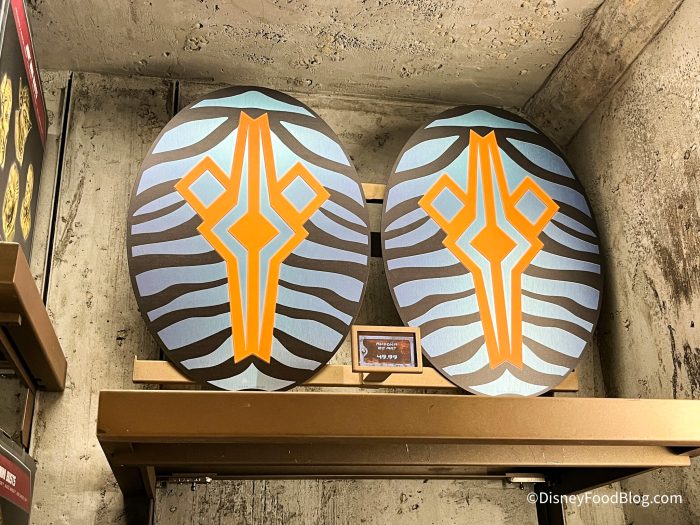 It is inspired by Ahsoka Tano  who can be seen in the Clone Wars series as well as The Mandalorian. The art is $49.99.

Still thinking about Sox the robot cat from Lightyear? Then you’re in luck, because you can grab this Sox plush at Mickeys of Hollywood! We’ve seen this plush already in Disneyland and online, and you can grab it for $24.99. 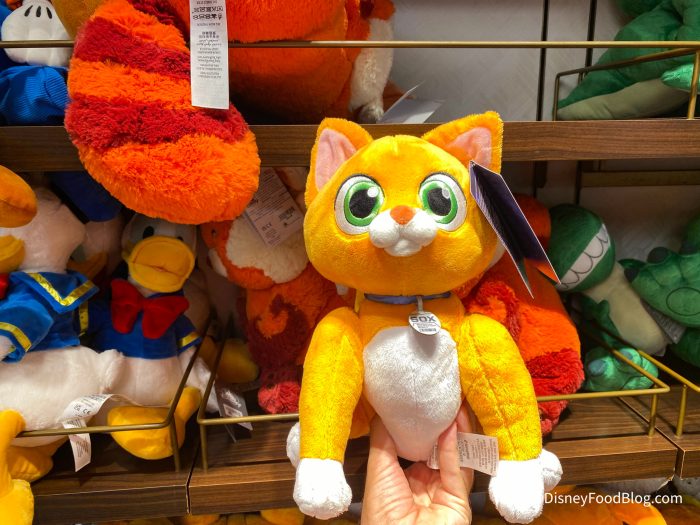 You can also get this jacket that is inspired by Lightyear, as well. It is $64.99. 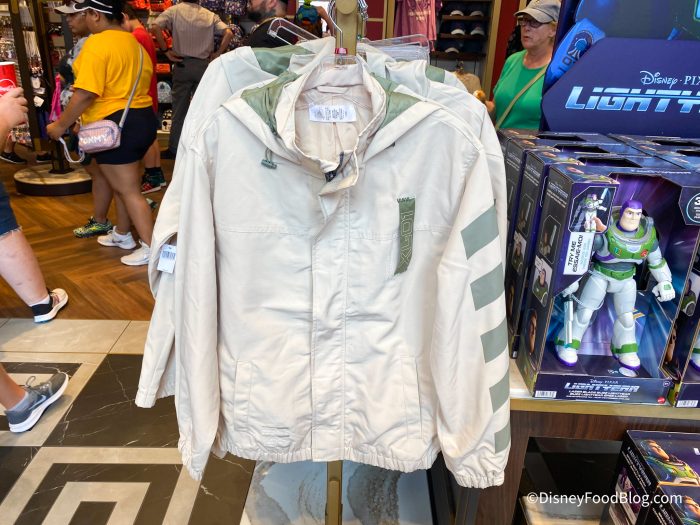 And for all the nuiMOs collectors out there, we spotted this nuiMOs skateboard! 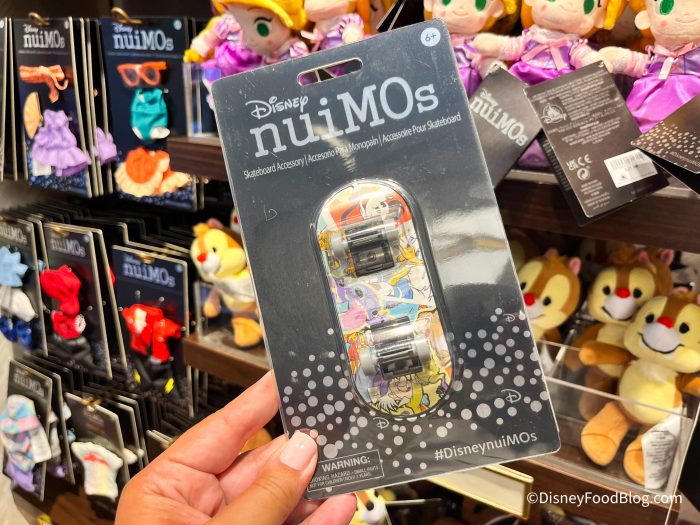 The skateboard has Disney characters on the bottom of it like Donald, Stitch, and the Mad Hatter. You can grab it for $12.99.

At Keystone Clothiers, we saw this Bo-Katan helmet. 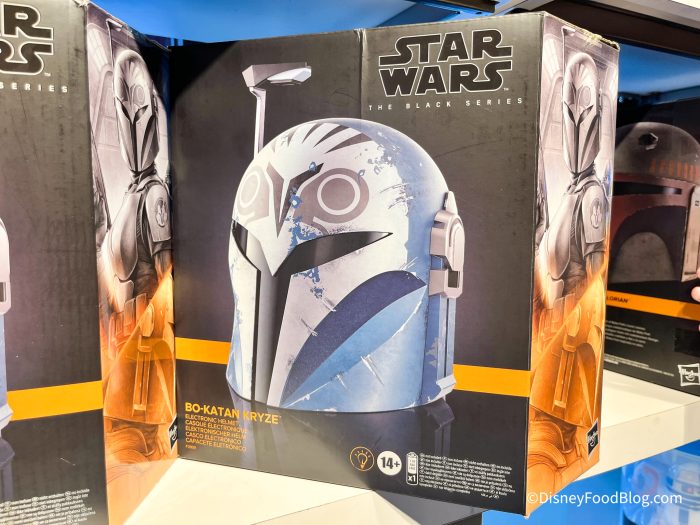 It is part of The Black Series and is electronic. Bo-Katan is a character that appears in The Mandalorian. You can grab the helmet for $139.99.

Over at the Droid Depot, we saw this Mubo keychain. 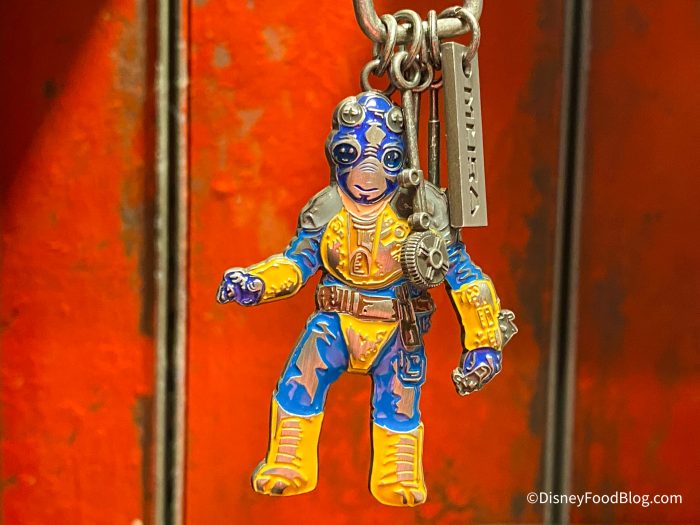 If you’re not up on your Galaxy’s Edge history, Mubo is the proprietor of the Droid Depot. You can grab the keychain for $14.99. 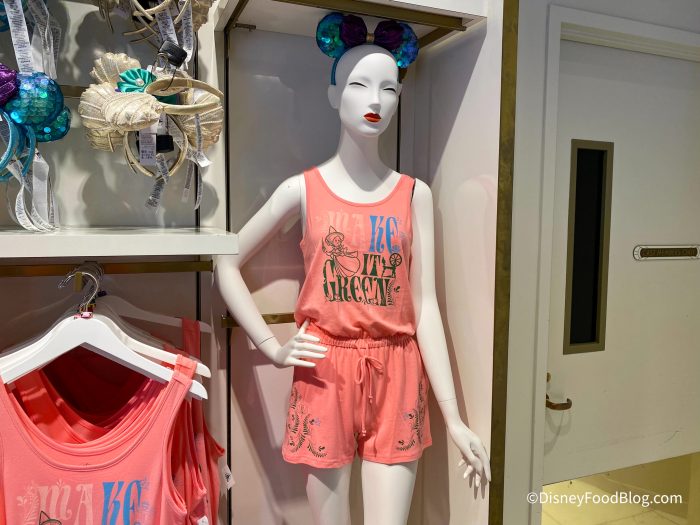 It is a peachy color and has one of the fairy godmothers on it. It says “Make it Green,” and has plant-like detailing on the bottom. It is $49.99.

We also headed to Sunset Couture, where we spotted this Marvel Pride ornament. 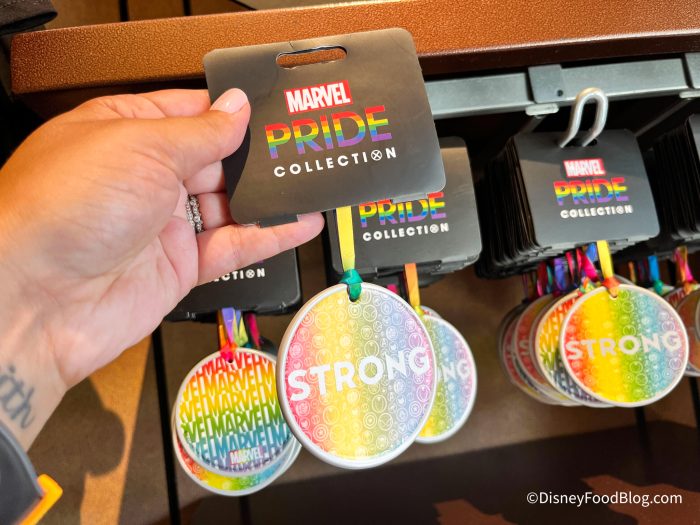 It is a rainbow gradient and has the word “Strong” on it. You can grab the ornament for $17.99.

Over at Tower Hotel Gifts, we spotted this kids shirt that has Zero, the ghost dog, from The Nightmare Before Christmas. It says “Full of Spirit” and is $19.99. 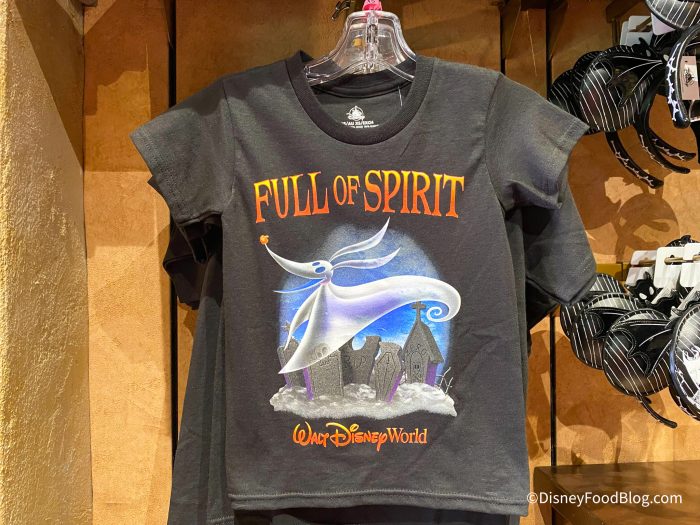 We also saw that the new Tower of Terror ears we spotted in here a few days ago had already sold out. 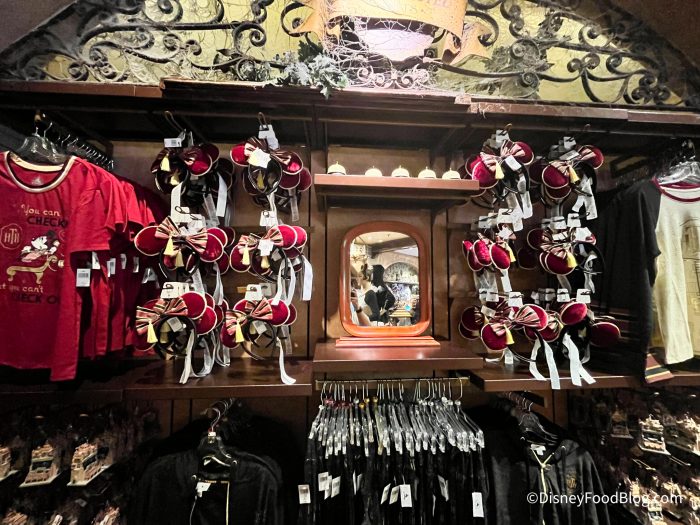 The new ears are sold out!

All that was left was the older version of the ears.

Click here to see every pair of Minnie ears you can buy online right now!

And that’s what’s new in Hollywood Studios, but that’s not all that’s happening around Disney World! The Polynesian Village Resort is currently undergoing construction as a new Disney Vacation Club building is coming to the hotel, and we’ve recently seen some demolition changes! 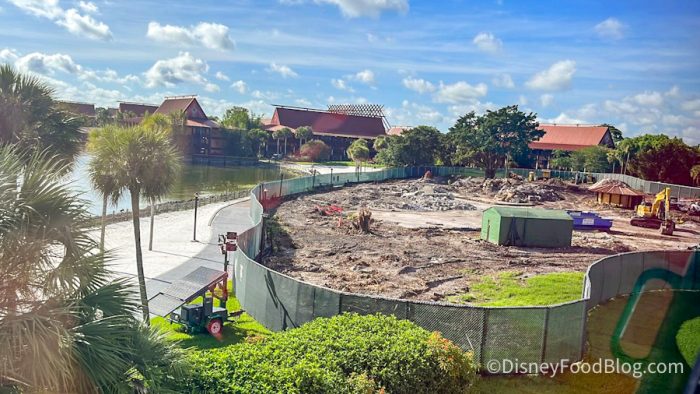 And, of course, TRON Lightcycle Run construction is continuing in Magic Kingdom, and we just got more details about the ride! As always, make sure to stay tuned to DFB for the latest Disney World news!

What’s your favorite thing about Hollywood Studios? Let us know in the comments!