If you miss EPCOT’s Maelstrom ride, love beer, are obsessed with hidden Disney details, and are looking for an escape from your day-to-day life, we know just the place you’ve GOT to visit! 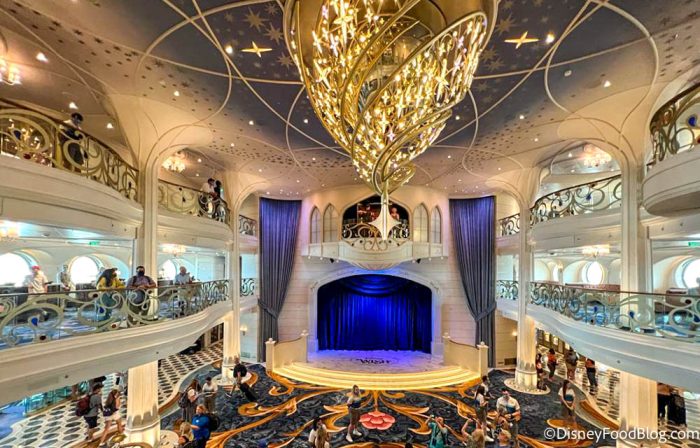 The Stage in the Grand Hall

with brand-new experiences for guests. We got to explore the entire ship before its maiden voyage, and we took you along with us for every single experience! We’ve shared a FULL review of the new Marvel dining experience, a complete look at the Frozen dinner show, and so much more. Now, we’re bringing you a review of one part of the ship that is covered in Disney details you can’t miss.

Keg & Compass is the Disney Wish’s signature pub, and it draws inspiration from a Norwegian sailor’s map room in the 1800’s. If you’re looking for a place to watch live sports, news, and major broadcast events, this is the place you’ll want to visit. Keg & Compass also features a special selection of beers, liquors, wines, and cocktails. Let’s dive in, shall we?

Keg & Compass transports you back to the 1800’s and mixes in the rich folklore of Norwegian seafaring with its dark decor and wooden accents. 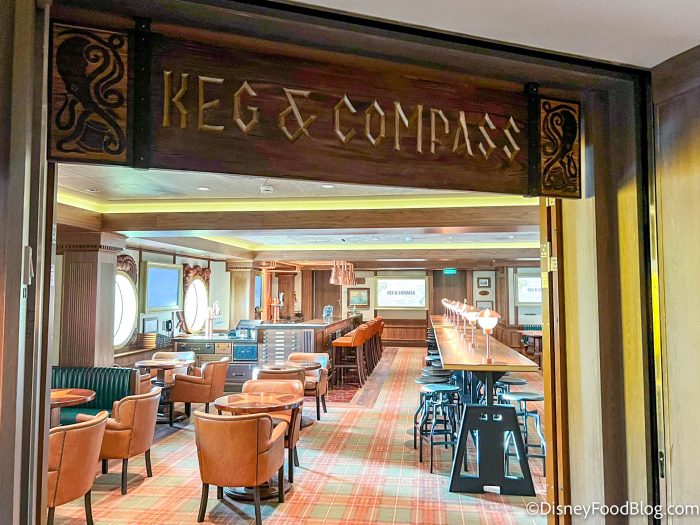 Time to Go In

The pub is “inspired by the romance and adventure of the sea.” The decorations you’ll see are inspired by the wood carvings you’d find on a historic Viking ship. 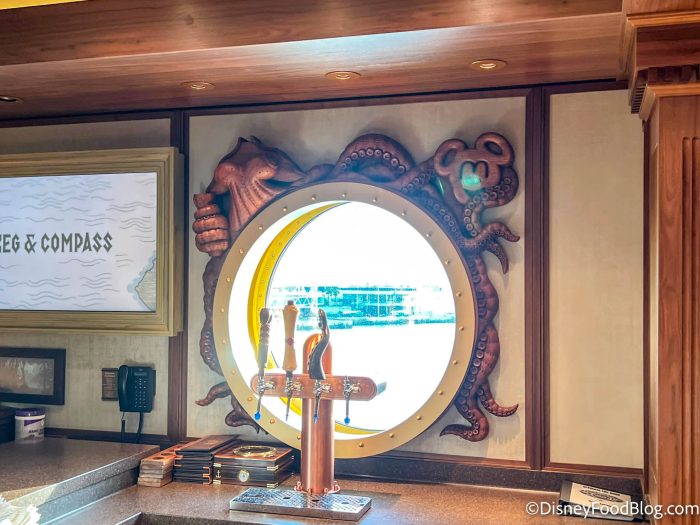 Speaking of carvings, make sure you pay close attention to those portholes in the space. The borders around the portholes were hand carved in Bali and have all kinds of little details hidden in them! 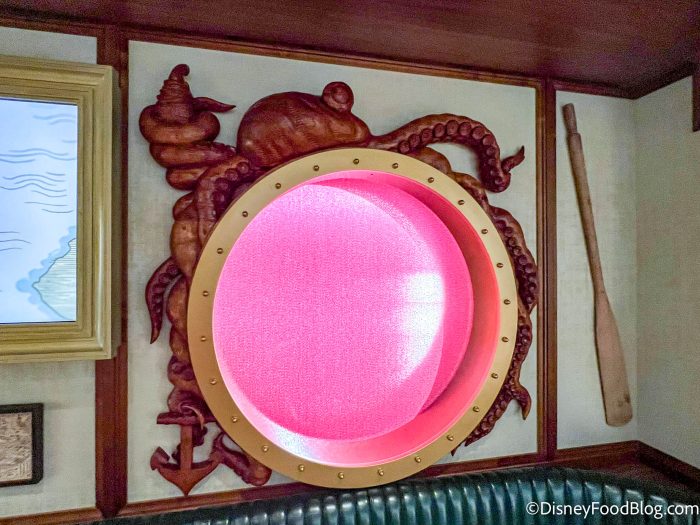 The borders are designed to look like octopi. In their tentacles, you’ll find little easter eggs like a DOLE Whip… 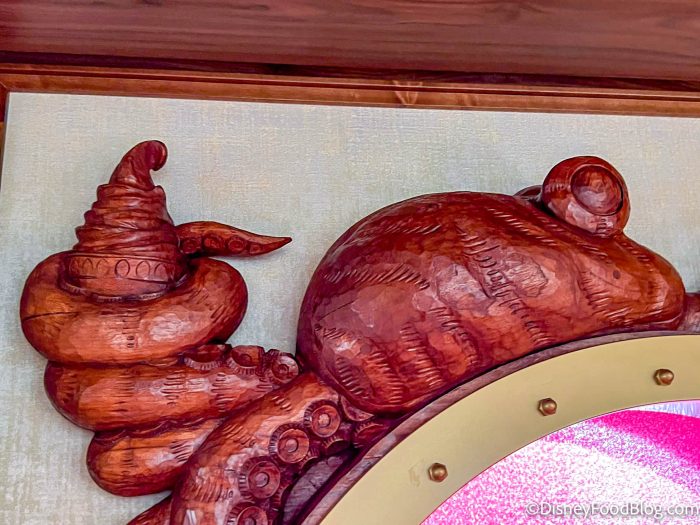 Are You Hungry Octopus? 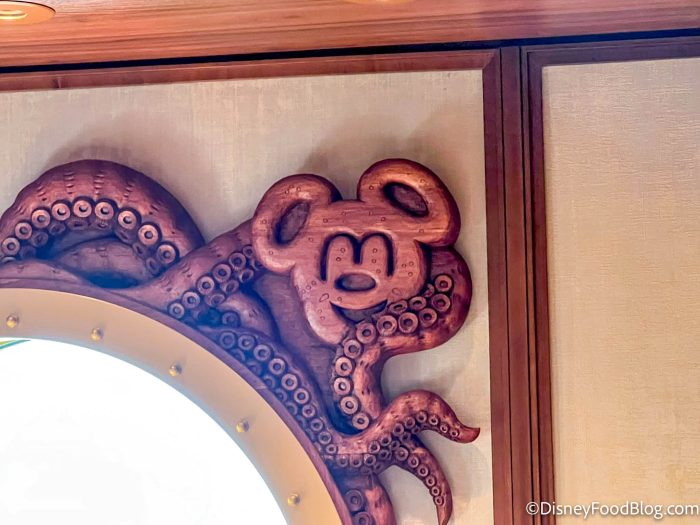 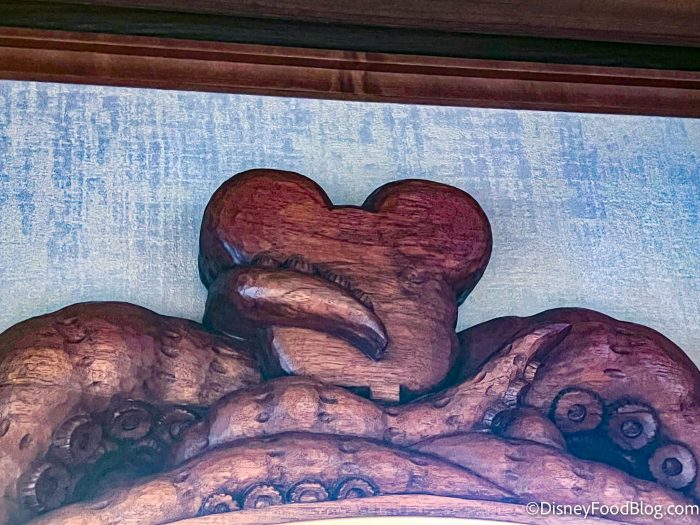 While you’re at Keg & Compass, you also can’t forget to look UP! On the ceiling, you’ll find a huge maritime map that has all kinds of hidden easter eggs. 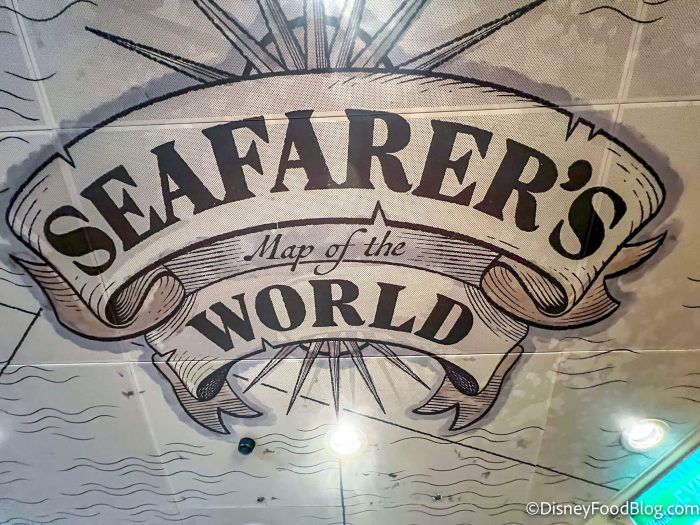 Seafarer’s Map of the World

One bartender told us that there are so many details on the ceiling that the man who did the work on it is actually going to come and train the staff on all of things hidden in there!

During our time there, we found the floating house from Up sailing across South America… 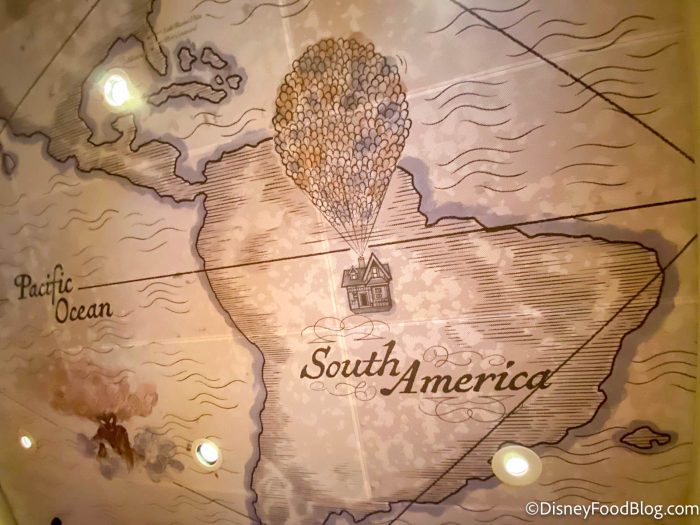 …and we spotted Te Kā along with Moana’s boat near the Pacific Ocean. Anyone else see Maui’s hook too? 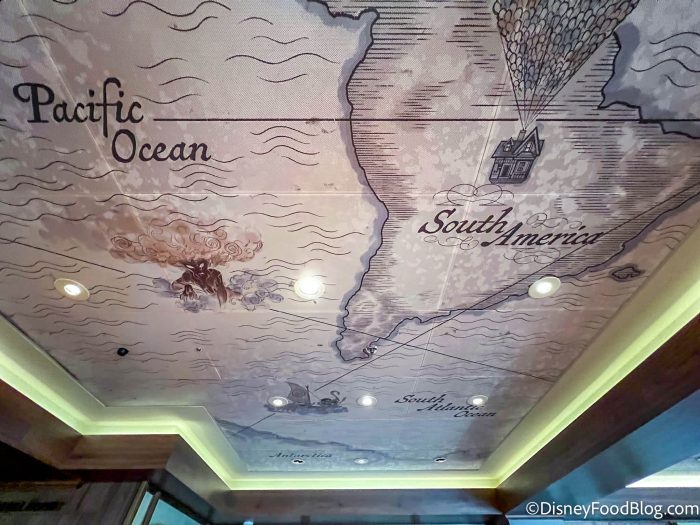 Do You See It?

In terms of seating options, there’s a variety to pick from here. You’ll find booths… 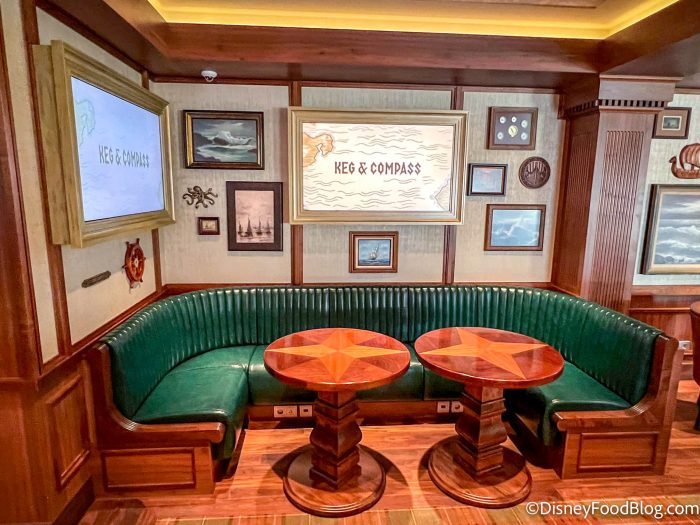 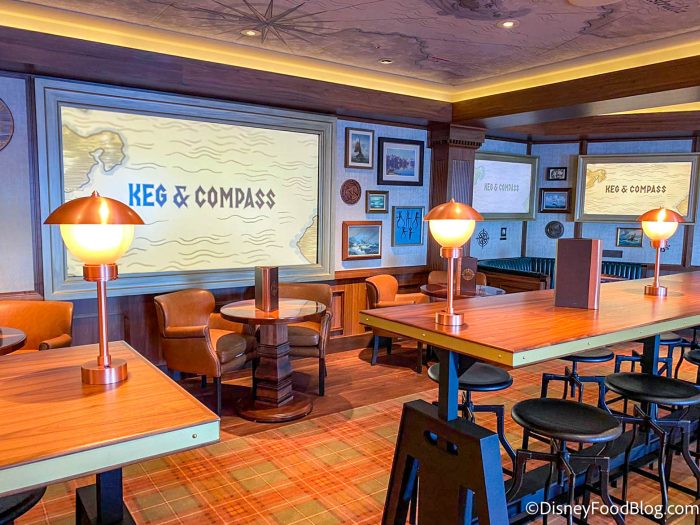 …a longer, elevated table with stools… 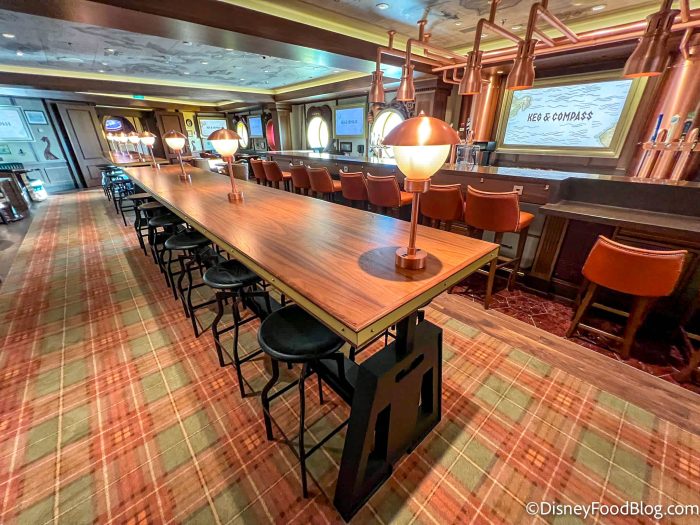 …and a bar with cushioned chairs as well. 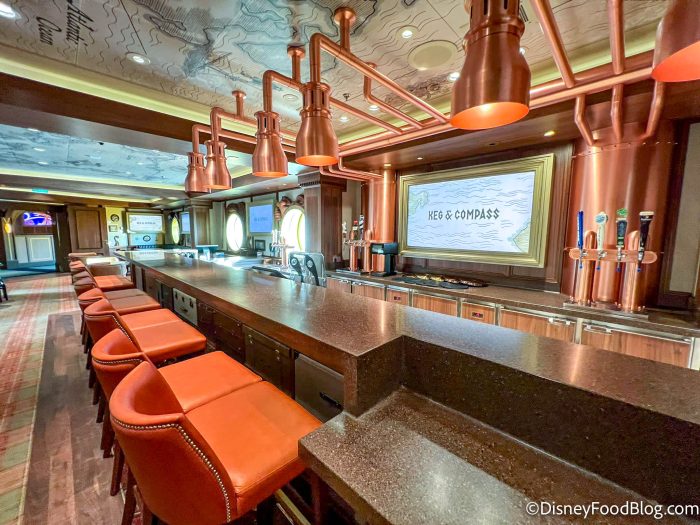 There were screens throughout the space that, at the time we visited, had the Keg & Compass sign on them. 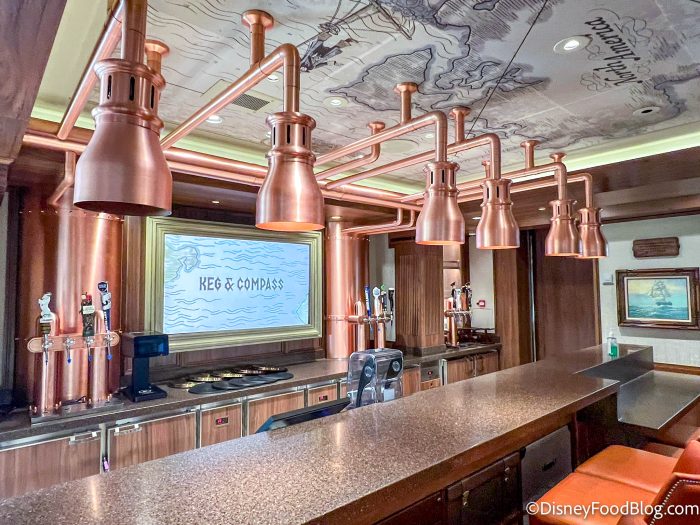 And we spotted some pretty elaborate beer tap handles! 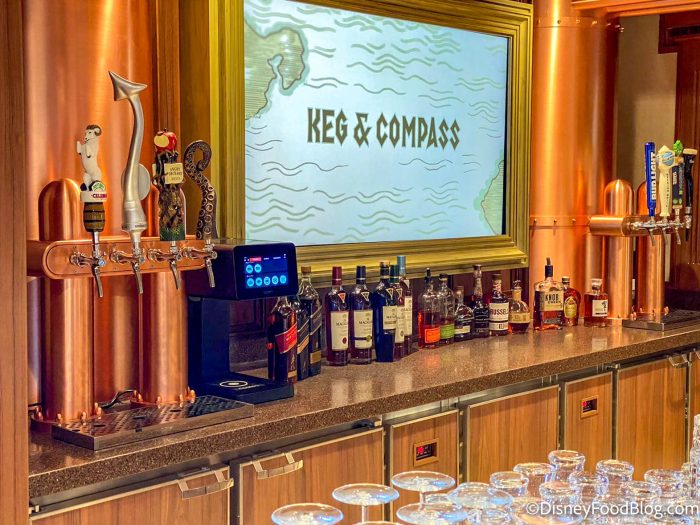 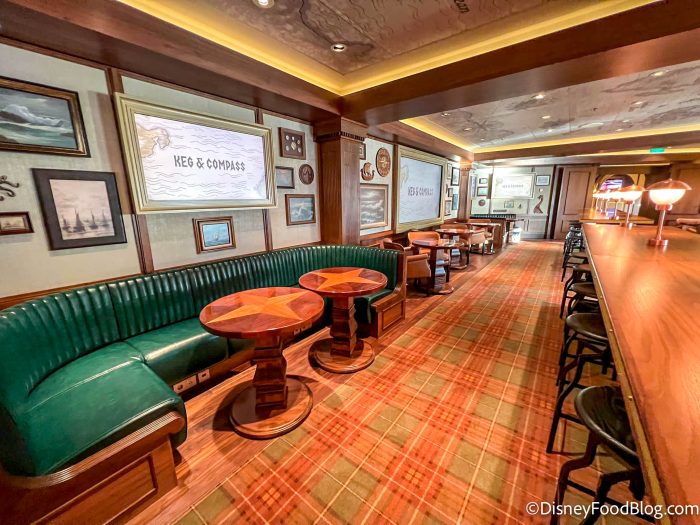 But, when it comes to easter eggs and hidden details, there’s one that we think will be a HUGE hit with EPCOT fans. Calling all fans of EPCOT’s Maelstrom: this one is for you!

This ride, which once existed in the Norway pavilion and has since been replaced with Frozen Ever After, used to feature a line in it that said “You are not the first to pass this way. Nor shall you be the last.” Well, you’ll find that EXACT same line on a plaque above the image of a ship in this bar! It’s a detail Maelstrom fans will have to make a point to find while there. 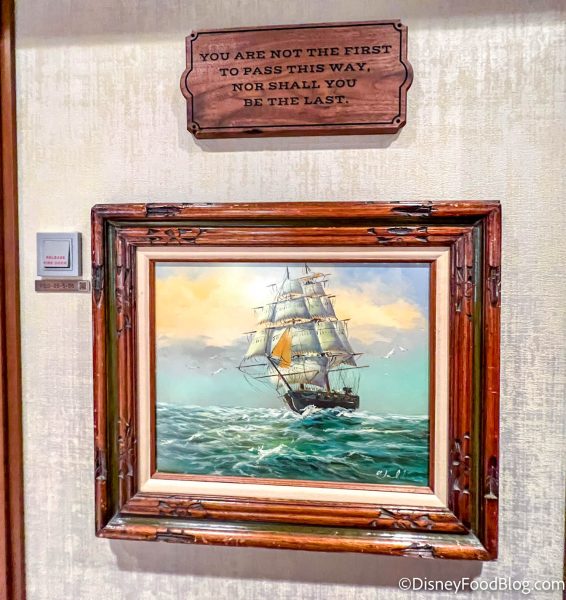 Maelstrom Fans: This One is For You!

We also spotted some dice and other items that appeared to be part of a game you can potentially play at this spot. We saw a few of them lined up behind the bar during our trip. 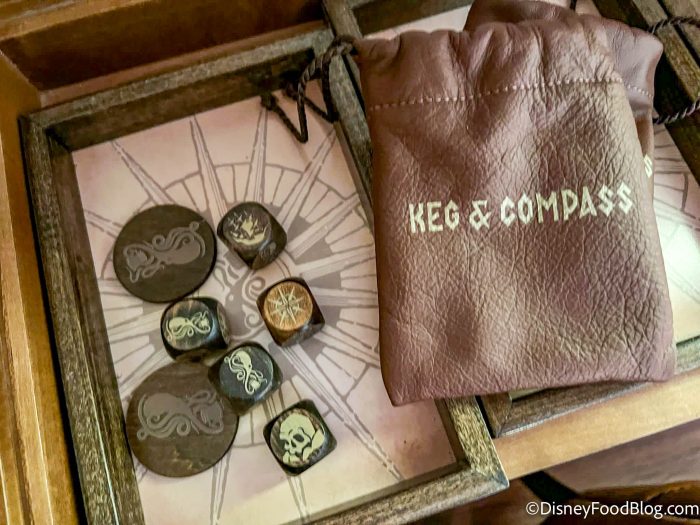 When you make your way over to Keg & Compass, you’ll be provided with a rather nautical looking menu. 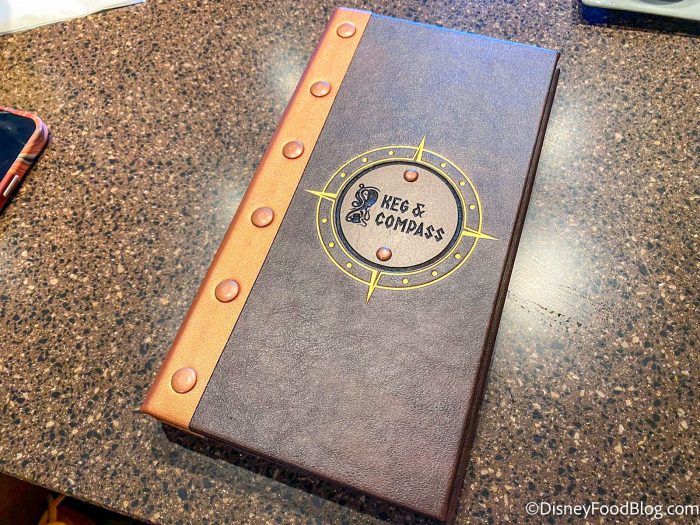 Inside, you’ll find a variety of drink options, as well as a few snacks. 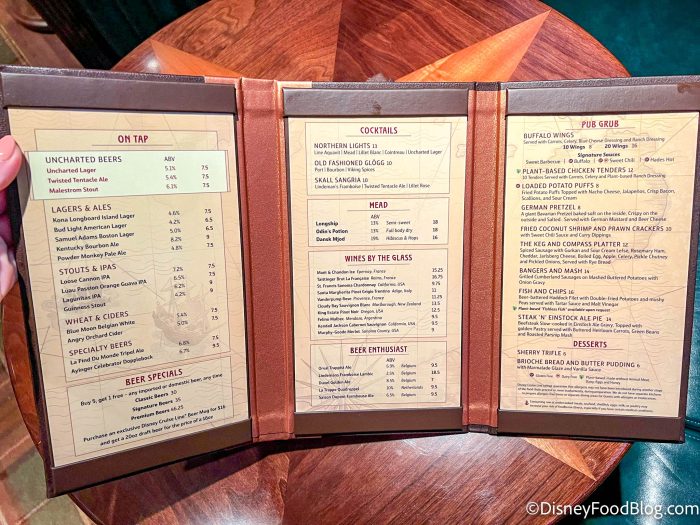 There are a few different beers available, including 3 that are made just for the Wish, and one named the Maelstrom Stout! There are lagers and ales, stouts and IPAs, wheat & ciders, and specialty beers as well. You can also grab a few different cocktails, some mead, and wine by the glass. 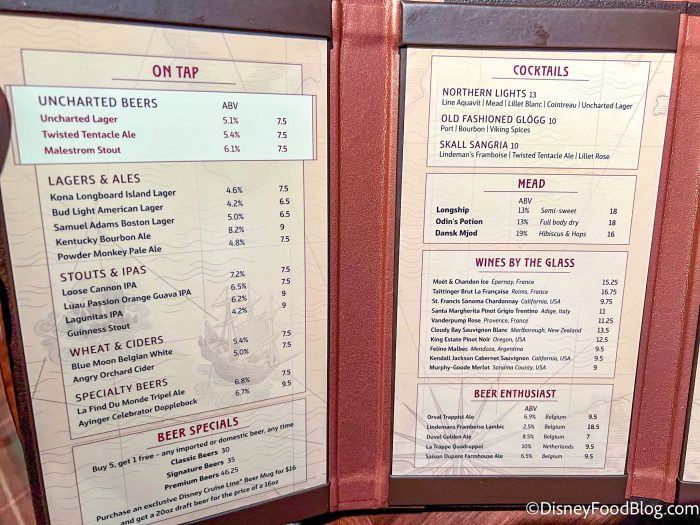 There are some beer specials if you want to try a variety of beers while there. And you can even get an exclusive Disney Cruise Line Beer mug for $16. 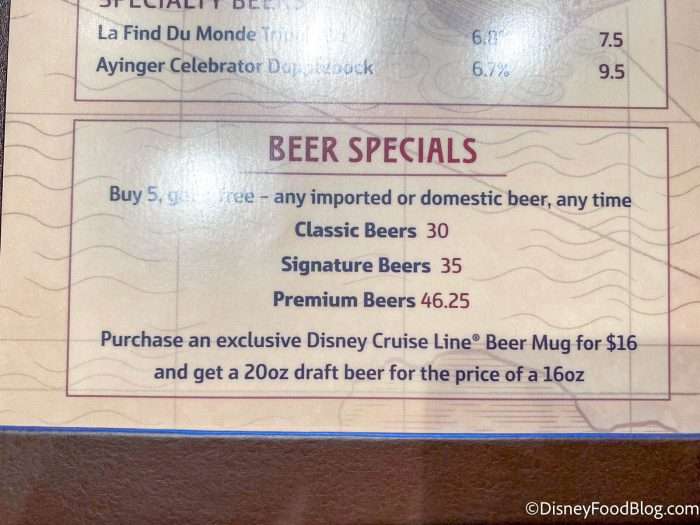 But wait, there’s MORE! Keg & Compass also has some “pub grub” like buffalo wings, loaded potato puffs, fried coconut shrimp and pawn crackers, and more. There are also some desserts, including a brioche bread and butter pudding.

So if you don’t necessarily want a full meal, but you’re looking to munch on some snacks with friends while drinking a beer and watching some sports games, this could be a good place to check out! 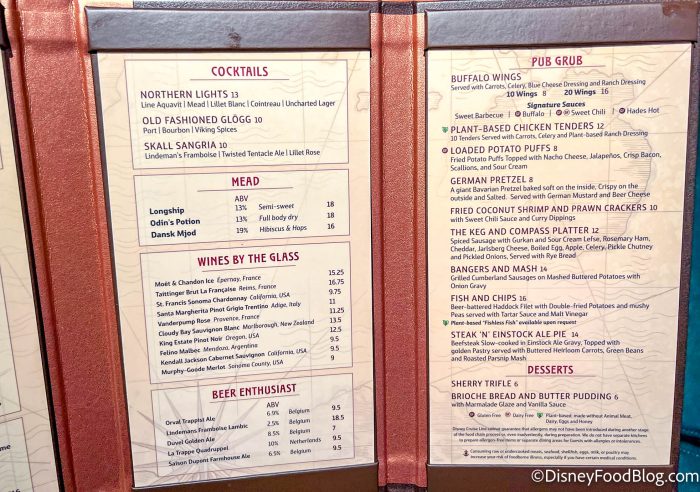 Rest of the Menu

An important thing to note about Keg & Compass is that the drinks and Pub Grub/Desserts here are generally NOT included in the cost of your cruise. So if you do come here to try that bread pudding and get an order of buffalo wings, be aware that those will be a separate charge!

During our time on the Disney Wish, we actually got to go to a beer tasting event that was held in Keg & Compass. These were part of an up-charge experience that costs $45. Note that this experience is not something you can just order at Keg & Compass (in other words, it’s not regularly on the menu), it’s something you arrange separately.

But all of the beers we got to taste are served at Keg & Compass, so we wanted to include our thoughts on those in case you decide to order any of these while you’re here!

As we mentioned before, the Wish has 3 beers that are exclusive to the ship, but none of those were available for us because of a problem with the keg line.

First, we had the Ayinger Celebrator Doppelbock. You’ll find this under the “Specialty Beers” portion of the menu. It costs $9.50. This was probably our favorite beer that we tasted and one of the BEST things we drank on the ship. The beer was uncorked almost like a chardonnay and was SO good. It had the robust flavors of something like a stout but was bubbly like a chardonnay. The flavor here was really savory, but also refreshing. The bubbles made it feel light, while it still had that wonderful flavor of a heavier beer. Overall, this was a total WIN for us. 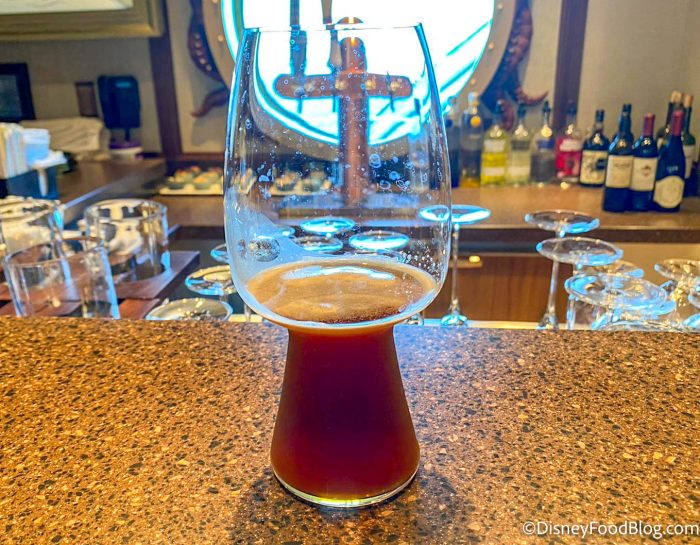 Then, there was the Angry Orchard Cider. You’ll find this under the “Wheat & Ciders,” and it costs $7.50. This was your basic, good apple cider. It was a little bit on the more standard side, which can be a bit boring for those looking for something more exciting. But if it’s a good apple cider you’re after, then you’ll find it with this. 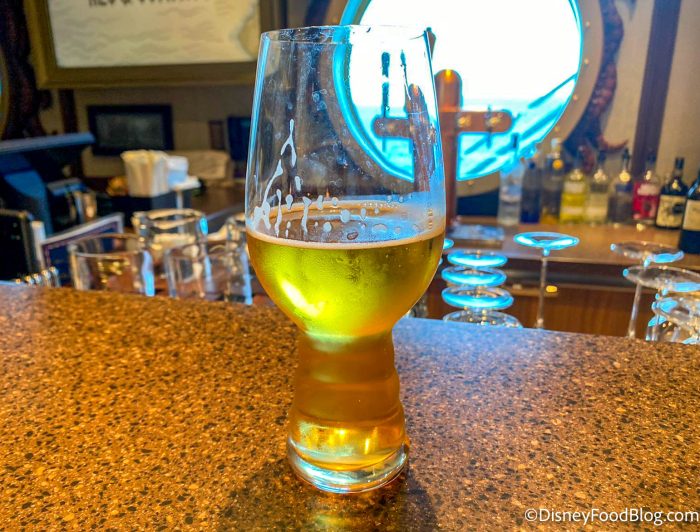 Next was the Loose Cannon IPA. You’ll find this under the “Stouts & IPAS” portion of the menu and it is $7.50. We really enjoyed this one. It was less hoppy than we were expecting, had a lot of great flavor to it, and is one we’d drink again! 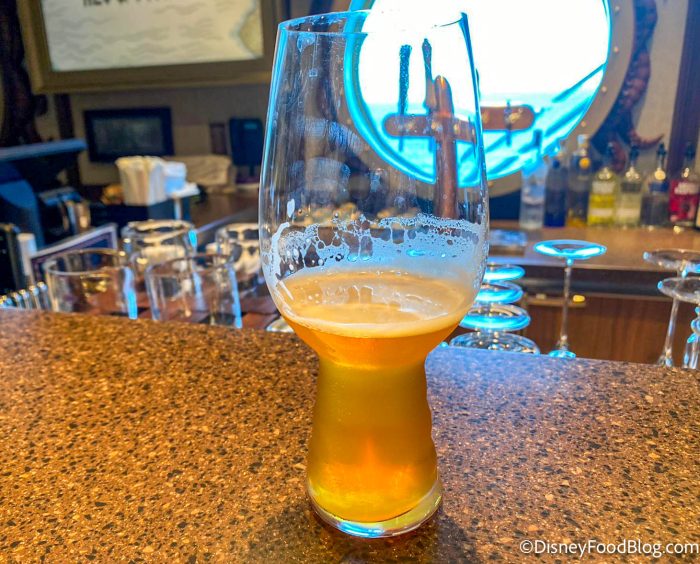 Then, we got to try the Powder Monkey Pale Ale. This is under the “Lagers & Ales” and costs $7.50. This was easy to drink but had a stronger beer flavor. 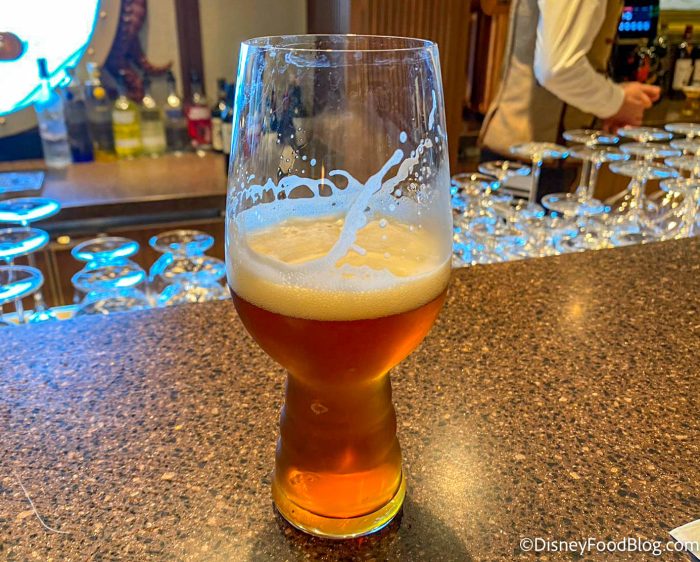 And finally, we sampled the Bud Light American Lager. This is under the “Lagers & Ales” and costs $6.50. This tasted like…well, Bud Light! It was a SUPER light beer that went down almost like water with just a hint of beer taste. 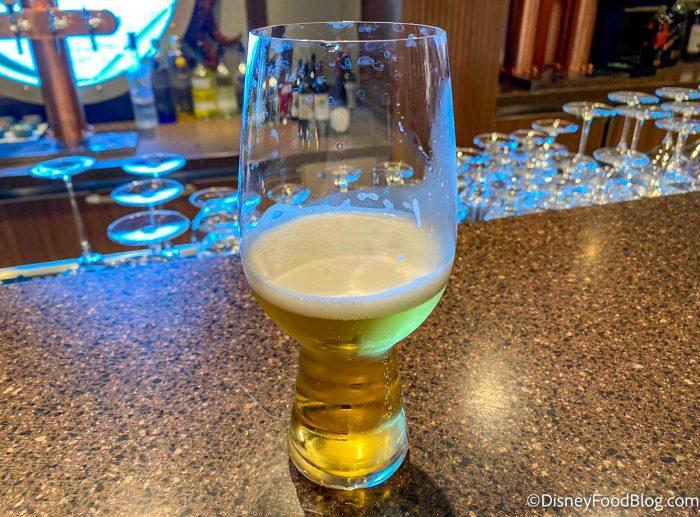 And that’s a look at our time at Keg & Compass! Let’s go over our overall thoughts.

Head on over to Keg & Compass if:

Overall, Keg & Compass fills that need for a pub environment on the ship. It has the TVs people crave with content from the “outside world,” like sports and news. It also has a welcoming feel and relaxed environment. Plus it is COVERED in fantastic Disney details. It’s a place you’ll definitely want to visit for those details, even if you don’t stay for a beer!

Click here to see all of the details about our adventure on the Wish!

Want to learn more about the Disney Wish and Disney Cruise Line? Take a look at the menus on the Disney Wish, and tour the most exclusive stateroom on the ship!

If you’re thinking about a Disney Cruise but aren’t sure what’s included in your trip  — we’ve got you covered. Stay tuned for more Disney news!

Are you setting sail on the Disney Wish any time soon? Let us know in the comments!

Disclosure: In nearly all circumstances, Disney Food Blog writers and photographers pay full price for their own travel, hotel, food, beverage, and event tickets. We do this because it’s important to us as journalists to ensure not only that we give you unbiased opinions, but also that you can trust us to do so since we’re paying our own way. On rare occasions, when we are invited by a company to attend a preview as media, and when we choose to accept that invitation, we will always make you, our readers, aware of that situation. We were invited by Disney Cruise Line to attend their media sailing on the Disney Wish. Note that when we attend events as media we are 1) Not required to review that event/food on any of our channels, and 2) Not required to review that event/food favorably. You can always count on DFB to give you a 100% unbiased and honest review of any event that we attend, food that we eat, or beverage that we drink. You can see more in our Disclosure Policy. Thank you for reading. — AJ

The post A Maelstrom Easter Egg, Hidden Details, and Beer — Join Us at Disney’s Keg & Compass! first appeared on the disney food blog.