A menu overhaul at one restaurant, new treats, and a MISSING fan-favorite cocktail? Disney’s Hollywood Studios has definitely been busy over the last few days, so you might have missed a LOT of news from this park. 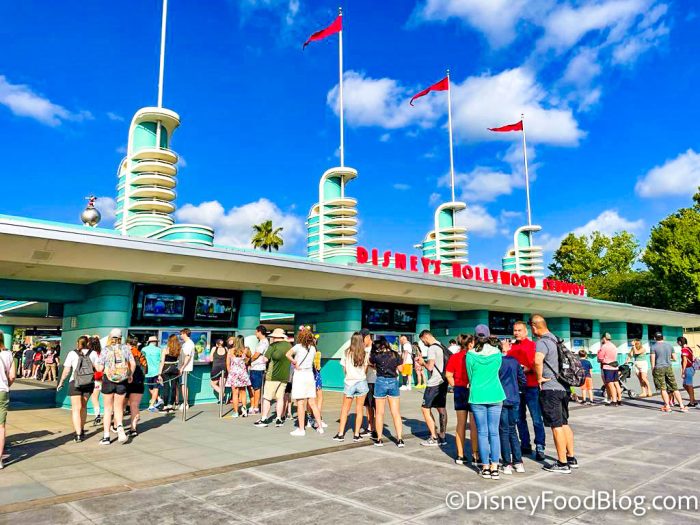 Don’t worry — we’re here to help! We’re in the Disney World parks every single day, so we’ve got all the latest updates to share with you. And just a fair warning before you keep reading: fans of the famous Fuzzy Tauntaun drink might be DEVASTATED by one of these updates.

Mama Melrose’s got a LOT of new menu items recently, so you might want to re-visit this spot if you’re a fan of classic Italian food. We tried several of the new dishes, including the Fried Fresh Mozzarella, the Grilled Bone-in Pork Chop, Mama’s Italian Pasta with Chicken, the Lasagna with Meat and Mushrooms, the Blueberry Frangipane Tart, and the Colors of Italy Cheesecake. 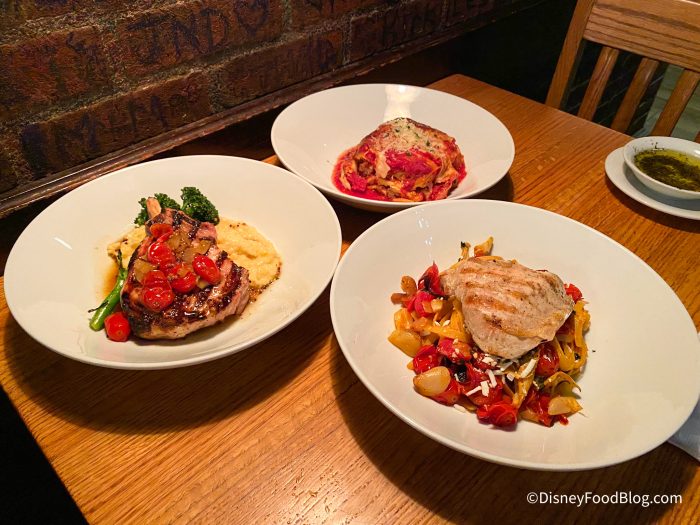 Some stand-outs for us were the Italian Pasta, the Lasagna, and the Cheesecake! That Lasagna was the daily special, but our server told us it might be added permanently to the menu soon.

This is the really bad news that we warned you about. We’re sorry to report that the Fuzzy Tauntaun cocktail has gone missing from the menu at Oga’s Cantina. We’ve been worried that this might happen for a while now, ever since it disappeared from the menu at Oga’s Cantina in Disneyland. On June 30th, a Cast Member in Hollywood Studios confirmed that the Fuzzy Tauntaun is no longer available in Disney World either. 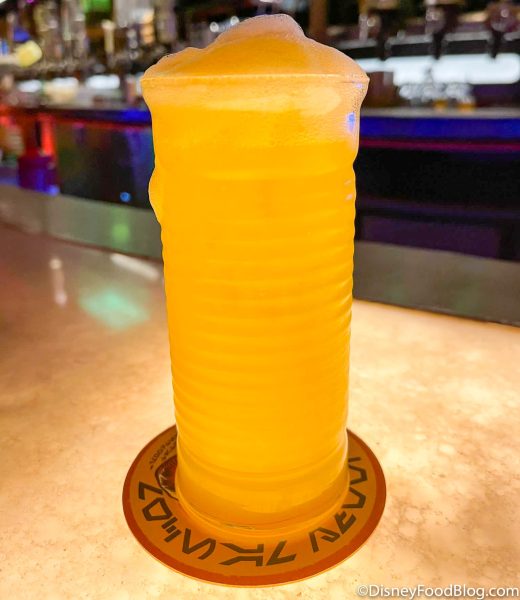 If you’re not familiar with it, this drink is made with Cîroc Peach Vodka, Bols Peach Schnapps, Simply® Orange with Tangerine, Pure Cane Sugar, and “Buzz Button Tingling” Foam. That foam actually makes your mouth go numb while drinking the cocktail, and that novelty has made this a fan-favorite choice for many. 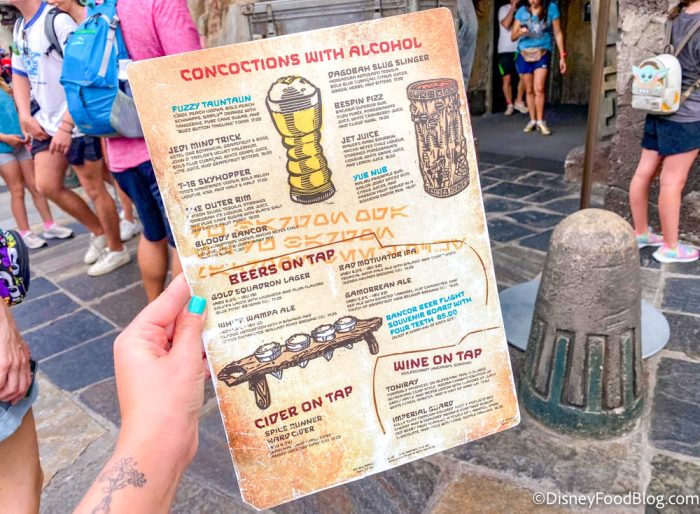 The Cast Member we spoke to said that the drink “might return” at some point, but they don’t know when that could be. Apparently, supply chain issues with one of the ingredients have made it impossible to keep the drink on the menu for now.

Click here to learn more about the missing Fuzzy Tauntaun in Disney World.

At Rosie’s All-American Café, we tried a new 4th of July treat — the Apple Pie Cupcake. It was a yellow cupcake filled with apple pie filling, topped with salted caramel buttercream, cinnamon streusel, and red, white, and blue-sprinkled Mickey ears. 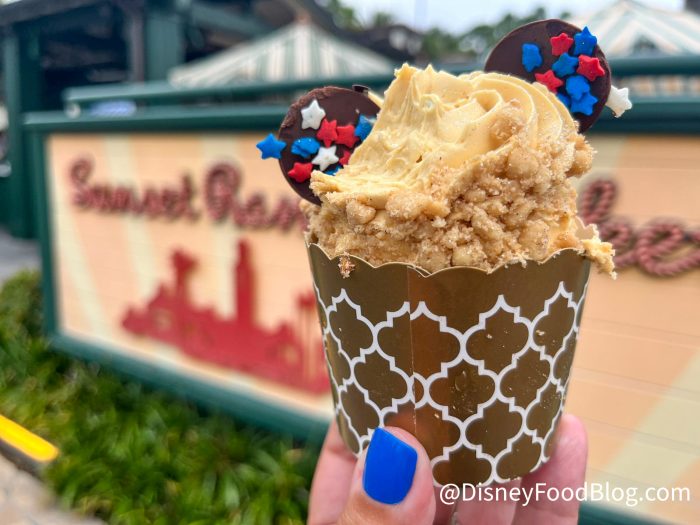 This cupcake wasn’t bad by any means, but there wasn’t a ton of flavor in the filling, so we were a little bit disappointed. It was only available through July 4th, but it could return next year for the holiday! It cost $5.79.

Read our full review of the Apple Pie Cupcake here.

Another 4th of July treat could be found at the ABC Commissary — the Red, White, and Blue Raspberry Frangipane Bar. This treat was simply layers of frangipane with raspberry jam in between, for $5.99. 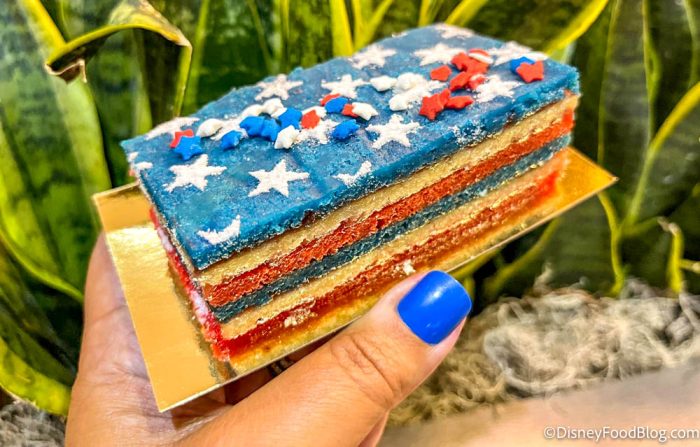 Unfortunately, this limited-time treat was another miss for us. The flavor of frangipane is a little bit unique, and our reporter didn’t love it. It was also only available through the 4th, but be on the lookout for it next year if it sounds good to you!

It turns out that the cheapest holiday treat we tried was also the most delicious! The 4th of July Lunch Box Tart from Woody’s Lunch Box for $4.29 was a twist on one of our favorite treats in this park. It’s a flaky pastry filled with cherry pie filling and topped with vanilla fondant and star sprinkles. 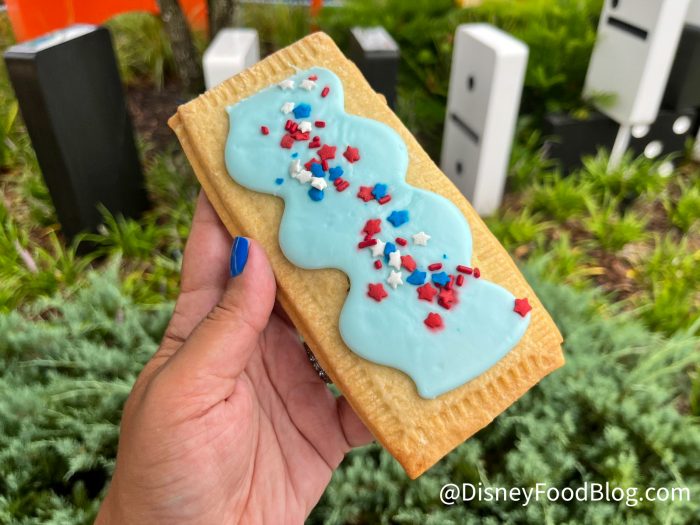 We thought the pasty was light and perfect, the cherry pie filling tasted like fresh fruit, and the fondant brought a good amount of sweetness. This one was also only available through the 4th, but we’ll be back next year if it returns!

Read our full review of the 4th of July Lunch Box Tart here.

As far as construction updates go, the MagicBand+ screen in Star Wars: Galaxy’s Edge is still covered by hedges. This screen will be part of the Bounty Hunting experience that’s coming with the new MagicBand+ program. 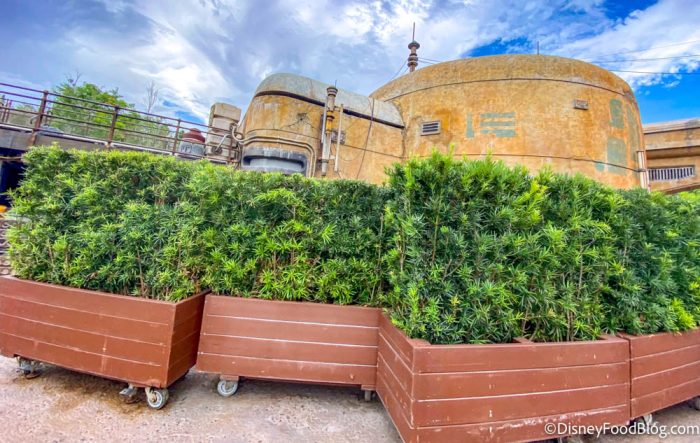 Disney hasn’t officially started MagicBand+, but they did accidentally release a few of the updated bands several weeks ago, and we got to try one out! The full system will launch sometime this year.

See everything PLUS about MagicBand+ here.

We also noticed a small construction update right at the entrance to Hollywood Studios, along Hollywood Boulevard. 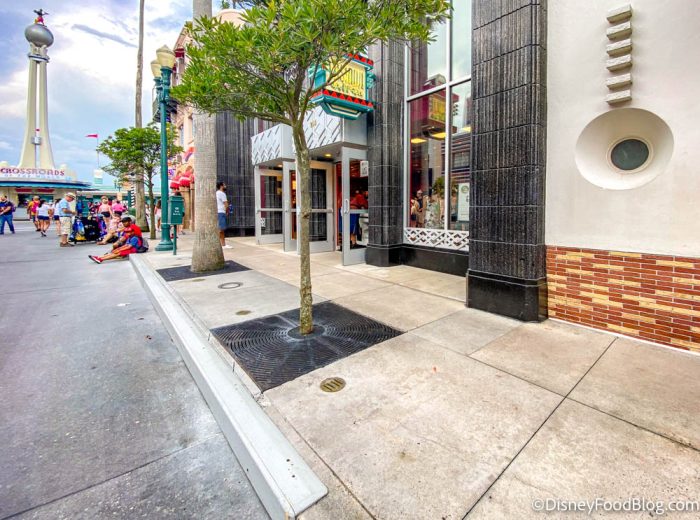 There’s a temporary curb installed in front of the Mickey’s of Hollywood gift shop.

At Tatooine Traders, we found a new Baby Yoda t-shirt that says “don’t play with your food” and shows the adorable Grogu using the Force to do exactly that. It’s available for $19.99. 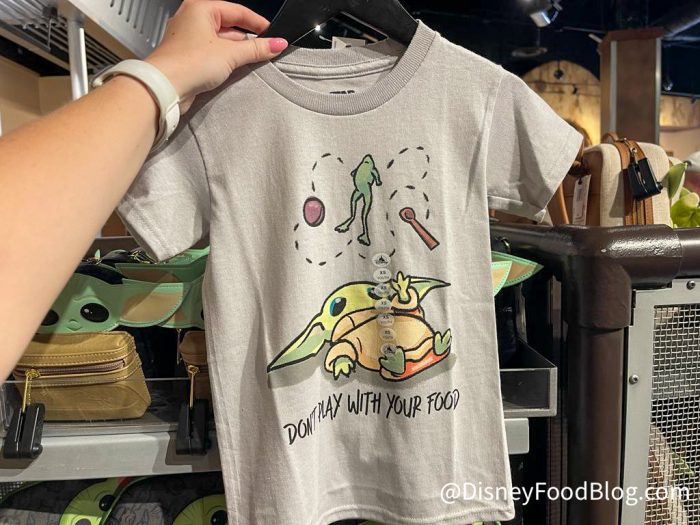 We also found a couple of Millennium Falcon shirts, including one that says “Let’s Take a Trip” with the falcon flying past the words. It’s $24.99. 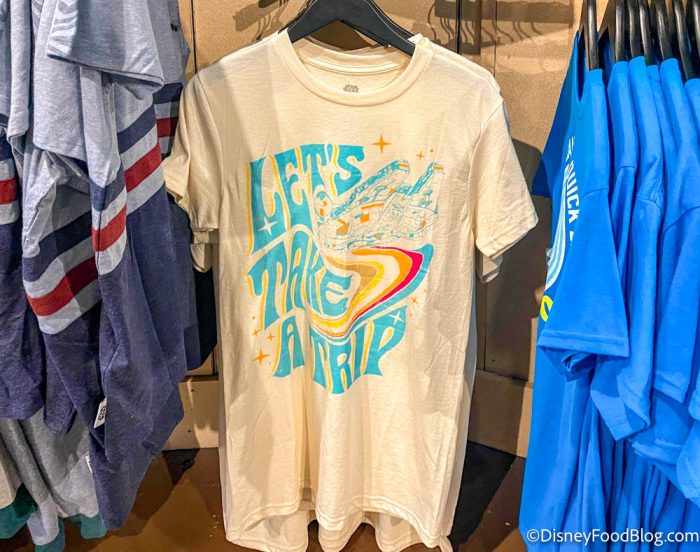 Another Falcon top is this blue tie-dye tank, which shows the Falcon as you may have never seen it before — as a cake! The shirt says “Cheat Day” and costs $36.99. 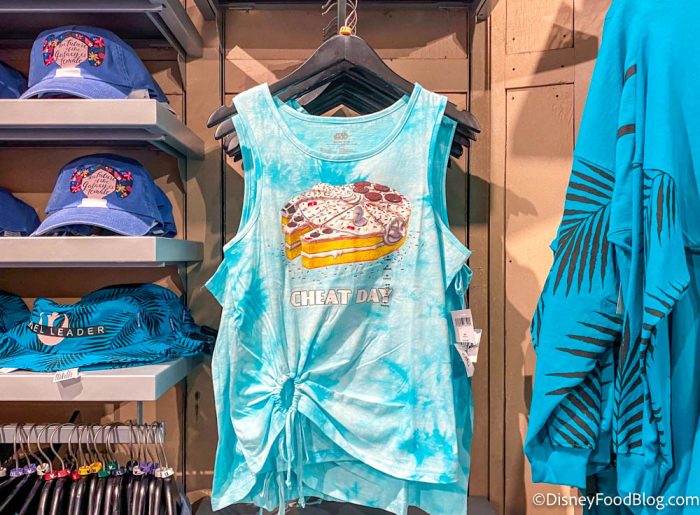 And finally, we found this big Sleeping Grogu stuffed animal, which matches several of the other sleeping Disney character plushes we’ve seen around Disney World. 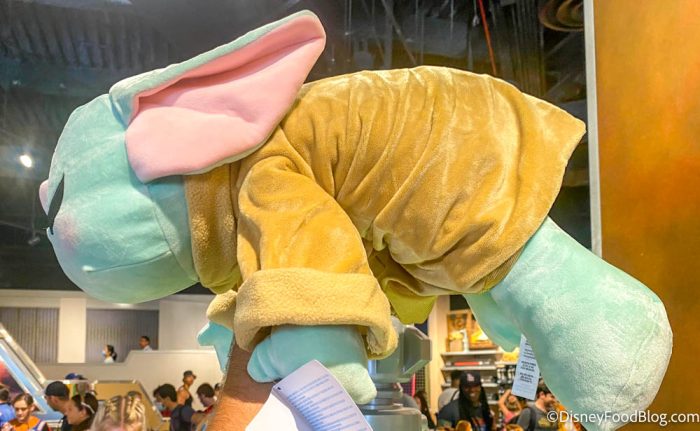 At Black Spire Outpost, we found the perfect cup for your blue or green milk! 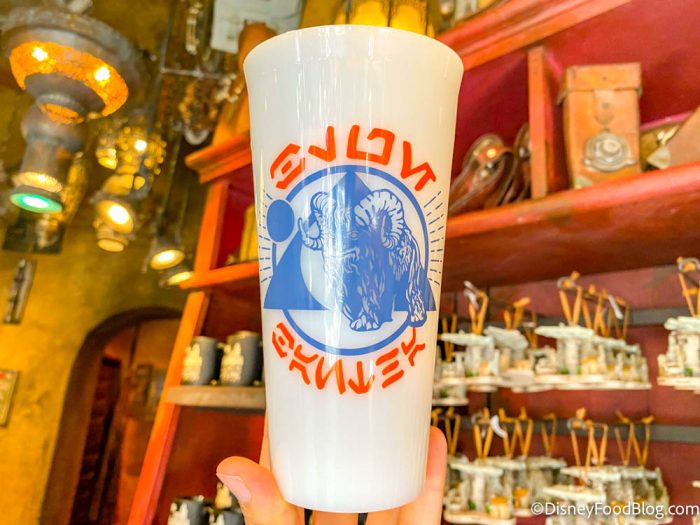 For the kids, there’s a Disney Princess activity book in Frozen Fractal Gifts. 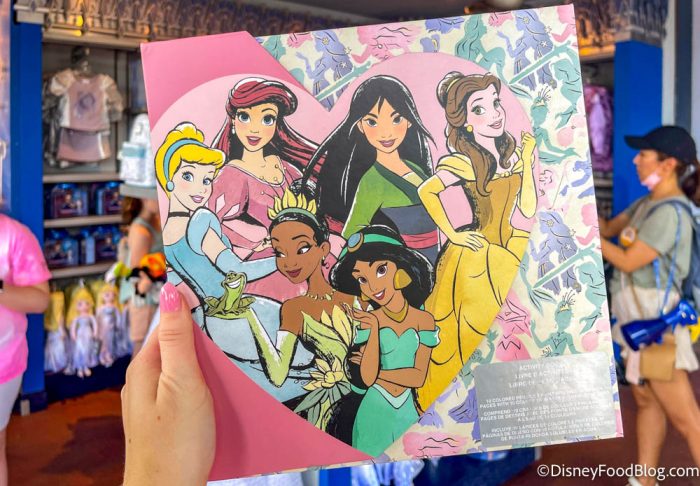 Inside are princess-themed coloring pages, some colored pencils, and other activities. It costs $19.99.

The popular Ahsoka Tano Legacy Lightsaber is BACK in Galaxy’s Edge, and you can find it at Dok Ondar’s Den of Antiquities for $400. 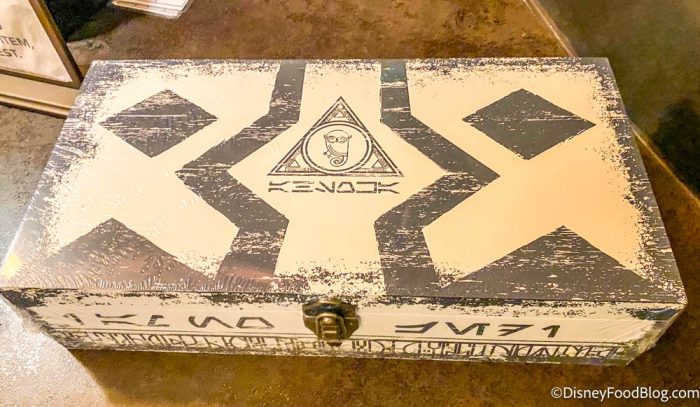 And we also spotted this nifty belt, which is made from a leather-like material and has some beads hanging off of it. 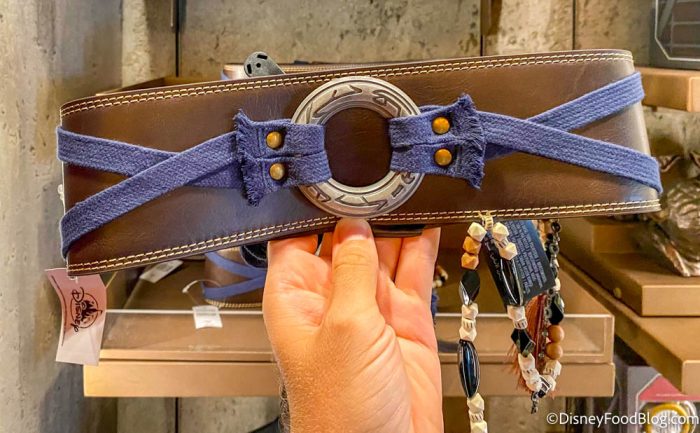 A few new Star Wars shirts were at Keystone Clothiers, including a two-toned Lightsaber shirt that says “May the Force Be With You Always” and costs $36.99. 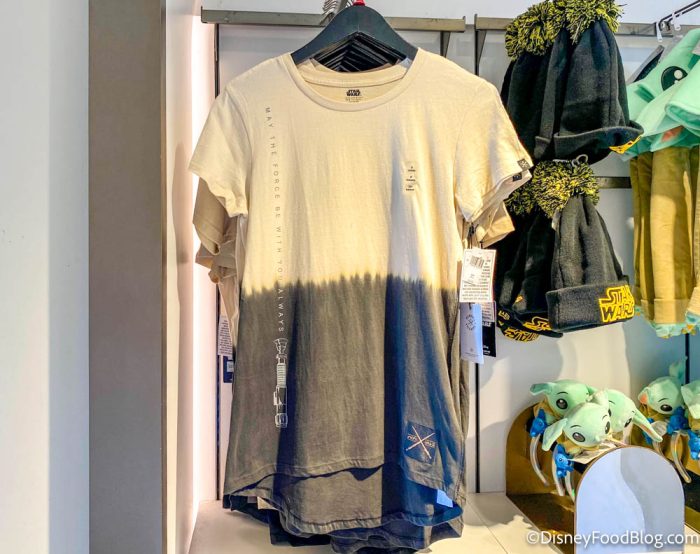 There was a kids’ striped shirt with crossed lightsabers at the bottom for $29.99. 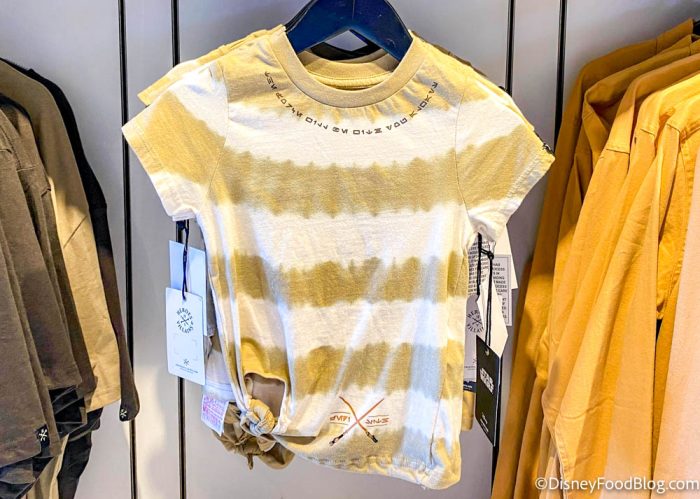 And we found another top that said “The force will be with you always; it binds the galaxy together.” 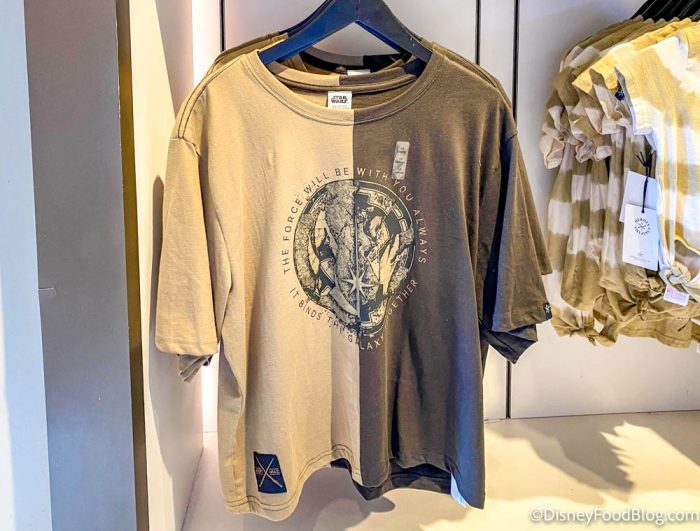 This one costs $36.99. All of these tops were part of the Heroes and Villains Star Wars collection.

A new 50th Anniversary souvenir has arrived at Celebrity 5 & 10 as part of the Vault Collection. It’s an Orange Bird Ceramic Cup! The cup has Orange Bird on the front… 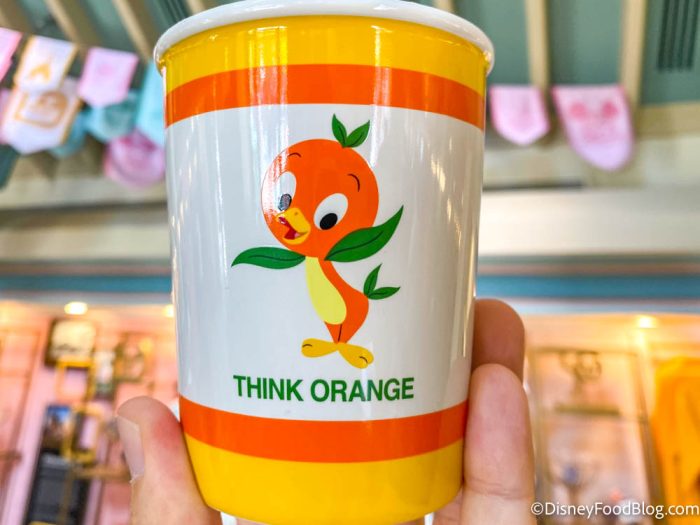 …and Disney World’s 50th Anniversary logo on the back. 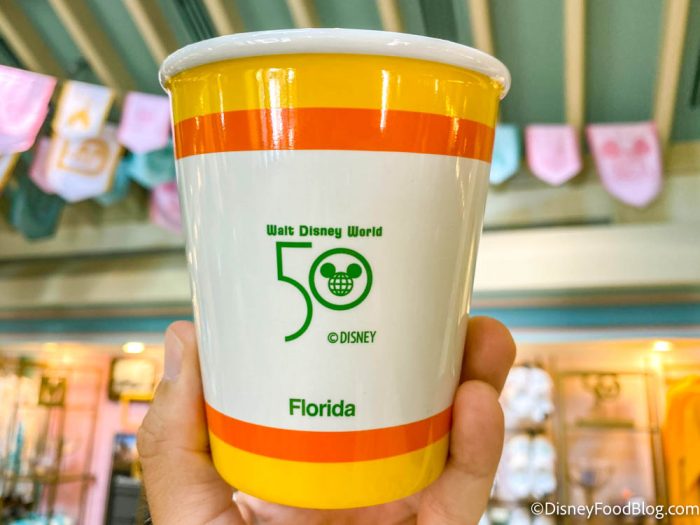 Legends of Hollywood had a new denim jacket that’s decorated with decals inspired by the Disney x Pixar movie Soul. 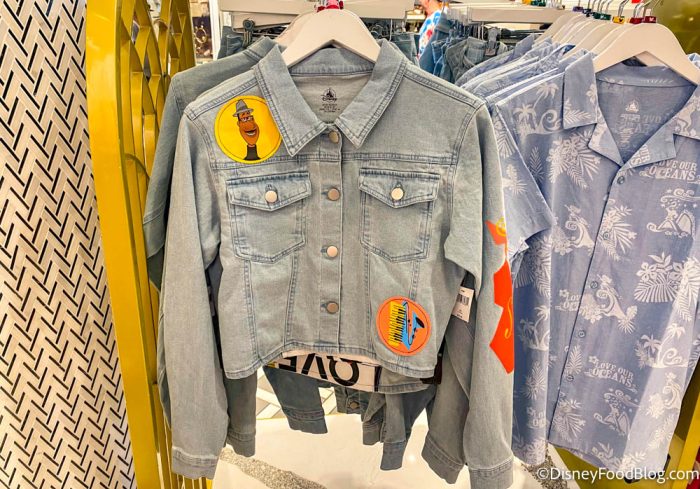 Once Upon a Time

And we found a new Mr. Incredible t-shirt at Once Upon a Time that says “Keep It 100.” 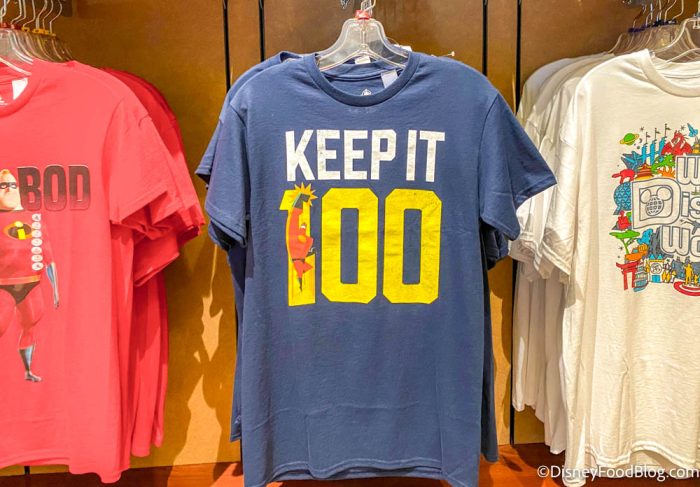 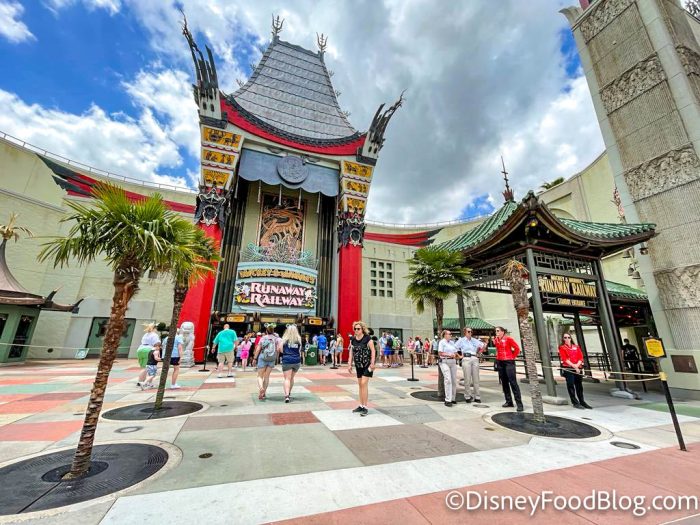 And that’s everything new at Hollywood Studios since our last visit! If you’re looking for more news from Disney World, check out 9 BIG updates you missed from last week, and be sure to take a look at the MENUS for EPCOT’s 2022 Food & Wine Festival, which will begin in just a couple of weeks.

Keep following DFB for more of the latest news from Disney World.

Click here to find out what’s new in Magic Kingdom!

Which Disney World park is your favorite? Let us know in the comments.