If you’re visiting Disney World soon, you’ll get to see a LOT of new things. The Guardians of the Galaxy: Cosmic Rewind coaster opened last month, and the updated Finding Nemo show in Disney’s Animal Kingdom is now open as well! But those aren’t the only new offerings in the parks.

Disney is consistently coming out with new treats, eats, and menus for all of the restaurants and snack locations around the parks. We recently took a look at some new treats coming out for Father’s Day this weekend, but now we have even MORE news for you when it comes to Disney’s dining scene. And some of these announcements are BIG.

Buckle up, because there are a LOT of changes and new items coming to Disney’s restaurants.

This spot debuted a new menu of unique ice cream flavors earlier this month! It’s called the Picnic Series, and it features some interesting flavors, like Fried Chicken and Deviled Eggs. 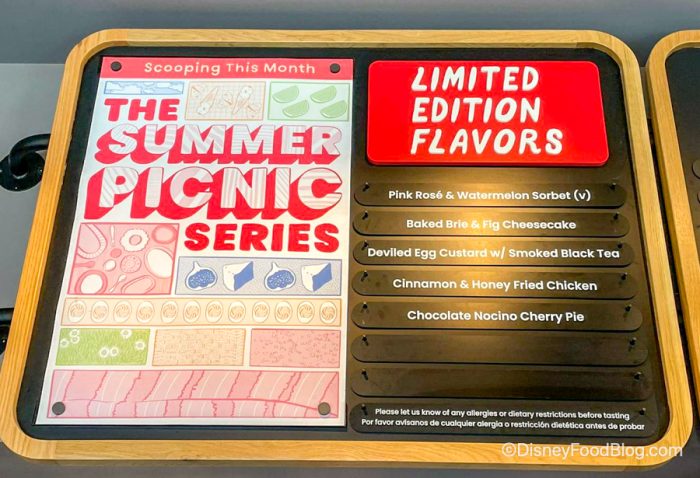 We’ve already tried out the new flavors, and we have to admit that Deviled Egg ice cream is not nearly as gross as it sounds! There are also some more traditional dessert flavors, like watermelon and cherry pie.

Check out our review of the Salt & Straw Picnic Series menu here.

Swirls on the Water — Disney Springs

This newer location in Disney Springs features all kinds of DOLE Whips! To celebrate the new Lightyear movie, Disney released a Buzz Lightyear Star Commander Cone, which is a purple cheesecake soft-serve adorned with chocolate wings and space sprinkles. 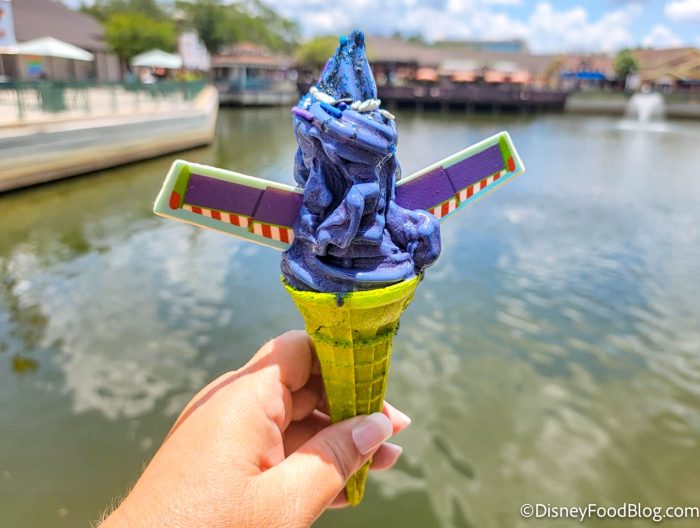 Disney’s picture looked awesome, which is what made our experience with this ice cream cone last week even more hilarious. 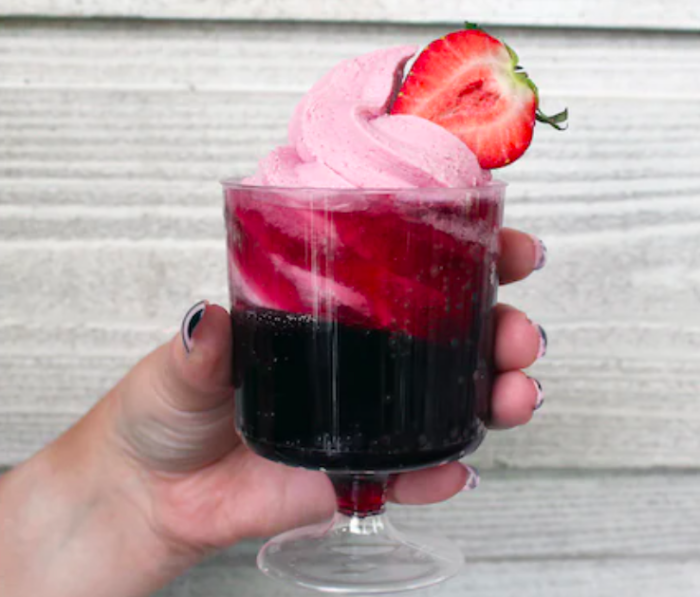 Swirls on the Water will also have a new DOLE Whip Float, which will have Rosa Regale Sparkling Red Wine, DOLE Whip Strawberry, and a fresh strawberry slice.

See our review of the Lightyear cone here!

At Magic Kingdom, head to Auntie Gravity’s Galactic Goodies to try the new Zurg Freeze, which will be available from June 17th through the end of the month. 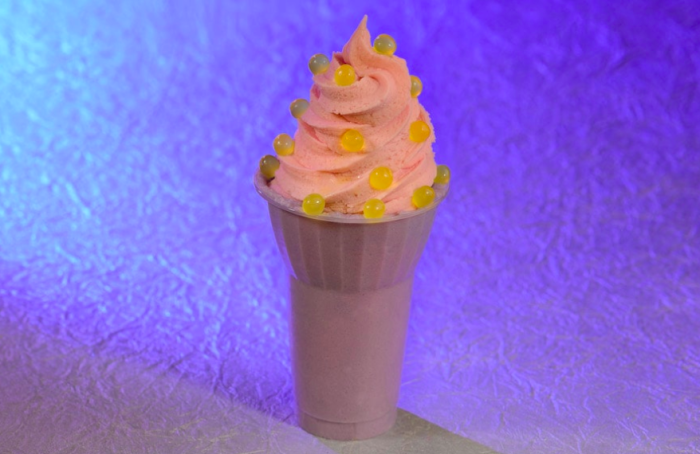 As you can tell from the name, this treat also celebrates the upcoming Lightyear movie!

Garden Grill recently updated their menu to include Barbecue-roasted Chicken with Sweet and Tangy Barbecue Sauce and Southern-style Spoon Bread. 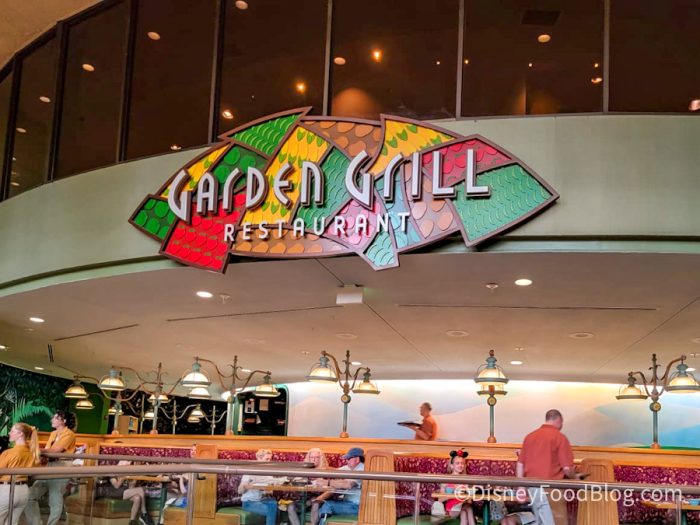 We noted these changes earlier in the week! The chicken replaced turkey in the all-you-care-to-eat meal.

Learn more about the changes at Garden Grill here.

Sunshine Seasons in EPCOT also has some new menu items, starting today! There will be a Roast Beef Sandwich, which is made with chilled roast beef, chimichurri aïoli, cheddar, arugula, and red onion on a flour-topped kaiser roll served with potato chips. There’s also a plant-based option here, which is a Mediterranean Vegetable Sandwich featuring roasted red pepper, red onion, tomato, arugula, hummus, and balsamic vinaigrette on herbed focaccia. 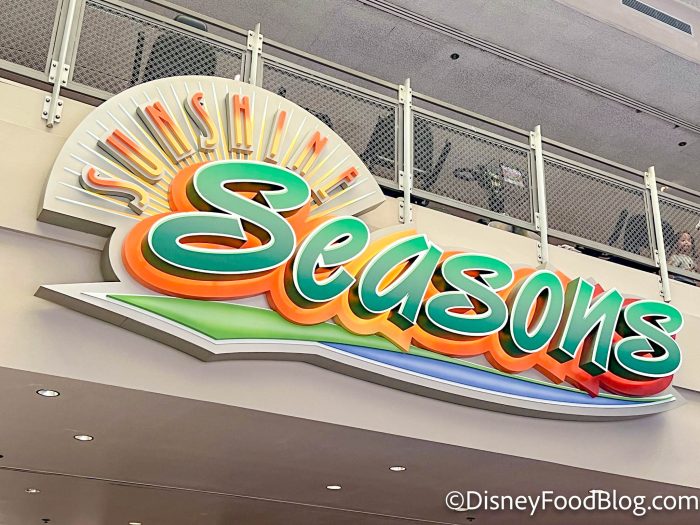 Coral Reef already updated their menu to include some new items including the following: 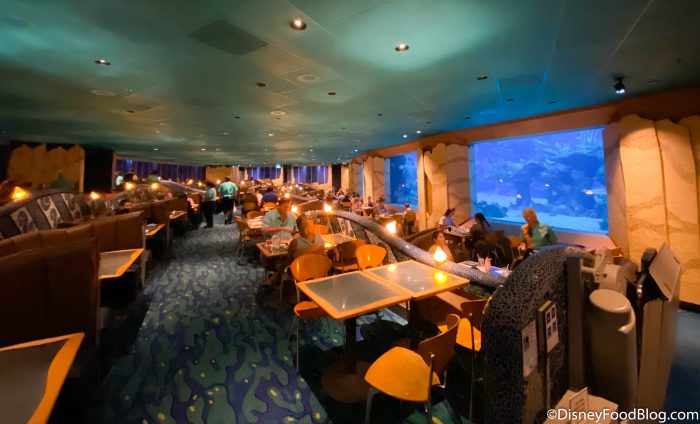 You can head in to try out the new additions now. (Note that we reported on these changes earlier in the week as well.)

Hollywood & Vine is bringing back its buffet this summer! It will return on August 28th. The all-you-can-eat buffet will have breakfast options like Brioche French Toast with Banana Foster Sauce, Salmon and Bagel Casserole, and Plant-based Frittata with tomato jam. 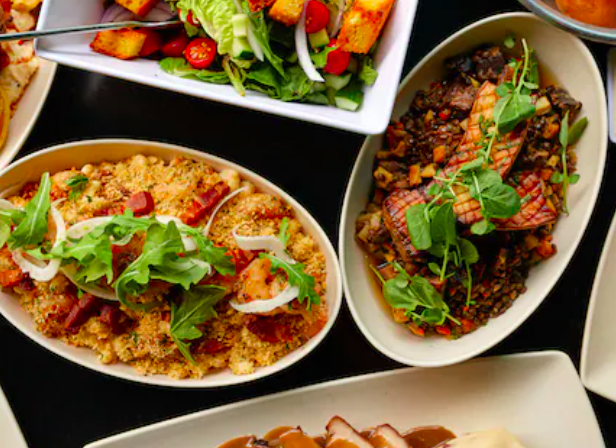 Lunch and dinner will feature dishes such as Plant-based Roasted Mushroom Farro Risotto, Slow-roasted Crispy Pork Belly with Guava glaze, and Shrimp and Bacon Mac & Cheese. Some desserts that you’ll find on the buffet include Mississippi Mud Pie and the PB&J Tarts.

Mama Melrose’s is getting a few new menu items “inspired by classic Italian cuisine.” Here’s a list of the new items: 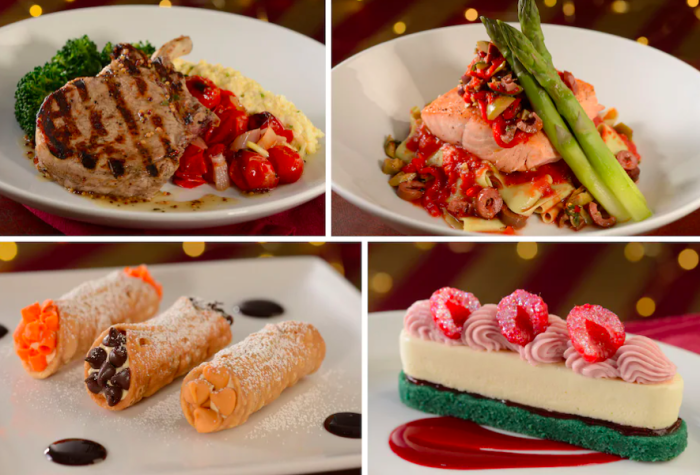 All of these items are expected to arrive in late June.

Disney has announced that “Olivia’s brunch service will be available every day of the week starting on September 1, with reservations opening soon.” 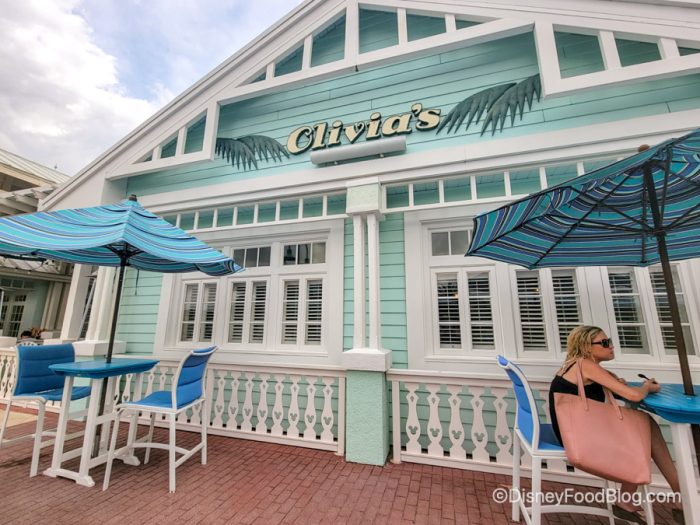 Some of the dishes you can get at Olivia’s for brunch will include existing options like Southernmost Buttermilk Fried Chicken, Papa’s Hash, and the Loaded Key West Bloody Mary. 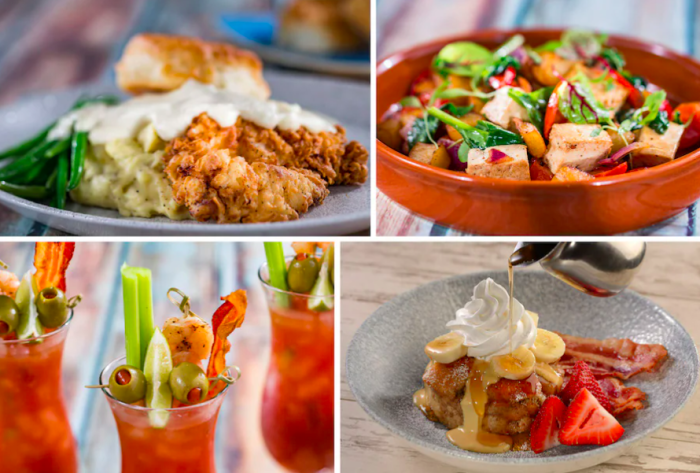 But there will also be a NEW menu item added — the Banana Bread Pudding! We already love the bread pudding over at ‘Ohana, so we can’t wait to try out this new dish. It will feature Bahamian banana-rum syrup and coconut whipped cream with your choice of bacon, sausage, or ham.

Some new treats are coming to Disney’s All-Star Resorts. Here’s a full list! 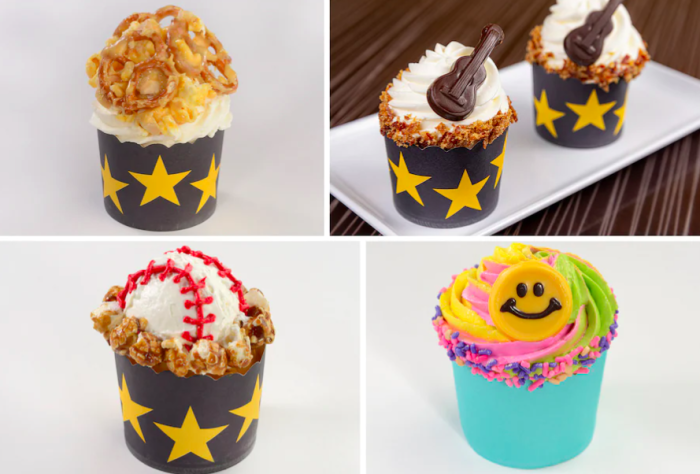 You can find the newest sweets at this hotel at Everything POP Shopping & Dining. 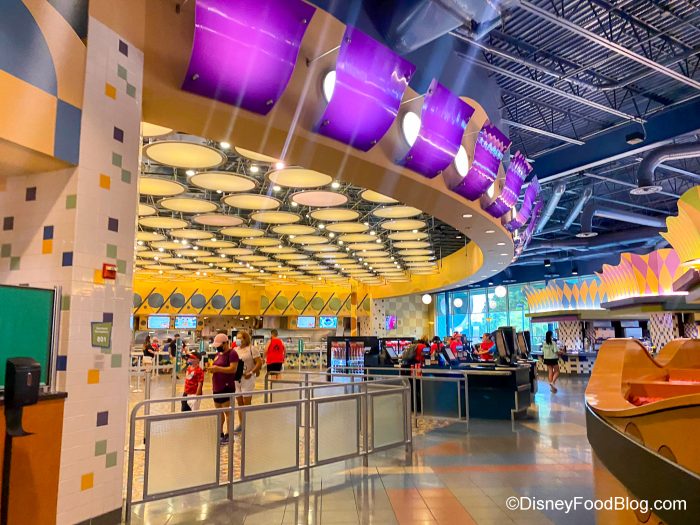 There’s also a new treat at Art of Animation! At Landscape of Flavors (the food court-style restaurant at this hotel), you can get the Lighting McQueen Gravel Road Sundae, which is vanilla soft-serve ice cream with chocolate cookie crumbs, chocolate sauce, and a Lightning McQueen chocolate coin. 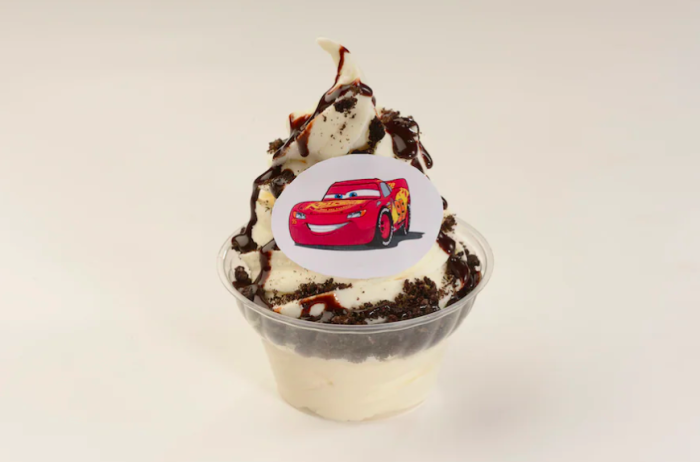 While we’ve already tried some of these new eats, we’re excited to taste the rest! We’ll be bringing you full reviews of all the new eats, so stay tuned with DFB to find out which ones are must-tries and which you should skip.

Click here to learn about limited-time treats coming to Disney World in June!

Which of the new items are you going to try first? Let us know in the comments.