With spring break mostly over and schools wrapping up before summer officially begins, we can usually anticipate that the Disney Parks will be a little less crowded this time of year. But, that has NOT been the case! 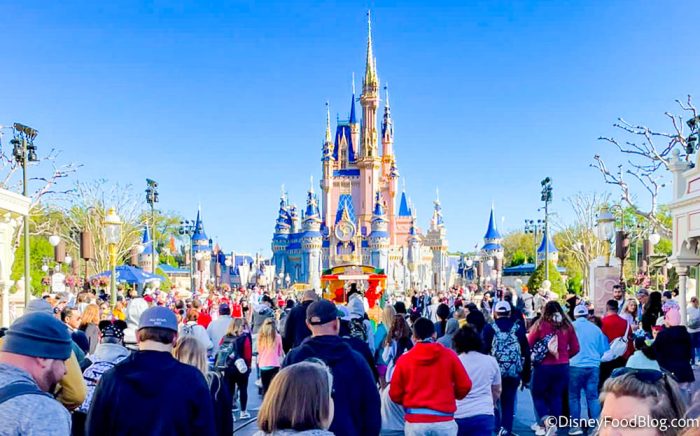 Wait times are climbing into the triple digits almost everywhere you look, and that probably won’t change any time soon as summer quickly approaches. So, if you’re heading to Disney World next week between April 24th to 30th, make sure you keep reading to find out all the park hours and pass updates you need!

Magic Kingdom’s hours will be 9AM to 11PM every day next week, except for April 25th — the park is closing an hour early at 10PM on this date. There will also be Extended Evening Hours for select resort guests on April 27th until 1AM.

EPCOT will be open from 8:30AM until 9PM every day next week, with Extended Evening Hours for select resort guests on April 25th from 9PM to 11PM.

Heading to Hollywood Studios next week? Let’s find out what park hours will be!

Park hours for Hollywood Studios next week are 8AM to 9PM daily. There are no Extended Evening Hours in the park for resort guests.

Guests can enjoy Animal Kingdom every day next week from 7:30AM to 8:30PM.

Now, let’s check out park pass reservations that are still available for next week.

Incredi-Passholders won’t be able to visit Magic Kingdom OR Hollywood Studios next week as park reservations are currently sold out, though this can sometimes change. EPCOT is available from April 26th to 30th, and guests can still book Animal Kingdom on April 28th.

Let’s check out the other passes!

Sorcerer Passholders can still make reservations at EPCOT from April 26th through 30th, and Animal Kingdom on April 28th. Both Magic Kingdom and Hollywood Studios are unavailable next week.

Onto the Pirate Pass!

Both Magic Kingdom and Hollywood Studios are unavailable next week for Pirate Passholders, but EPCOT is still available from April 26th to the 30th. Animal Kingdom also still has availability on April 28th.

Pixie Dust Passholders are blocked out of all four parks on April 24th and April 30th. EPCOT still has availability from April 26th through 29th, and Animal Kingdom is available on April 28th.

Now onto other ticket reservations!

Theme park ticket holders can make reservations at EPCOT every day next week. Animal Kingdom is available on April 27th, 28th, and 30th, but Magic Kingdom and Hollywood Studios are both sold out all week. 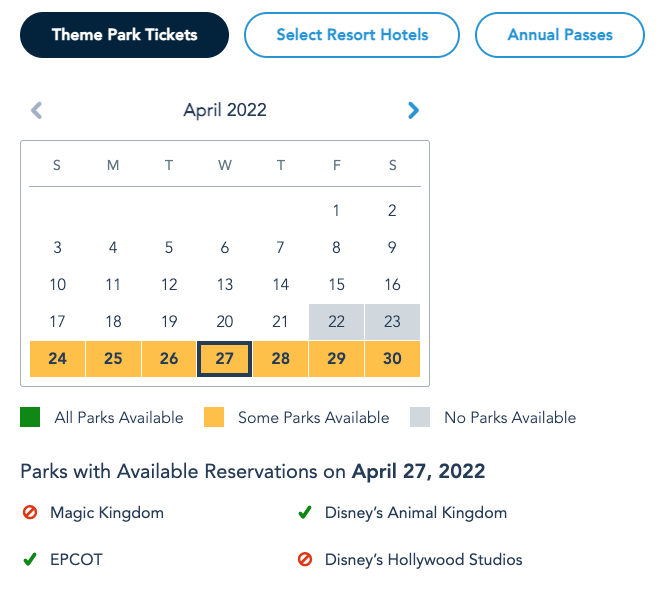 And finally, let’s find out what the availability is like for resort guests next week.

Select Resort Hotel Guests are able to visit EPCOT every day next week, and Animal Kingdom is still available on April 27th, 28th, and 30th. Magic Kingdom and Hollywood Studios are unavailable next week, but this could always change. 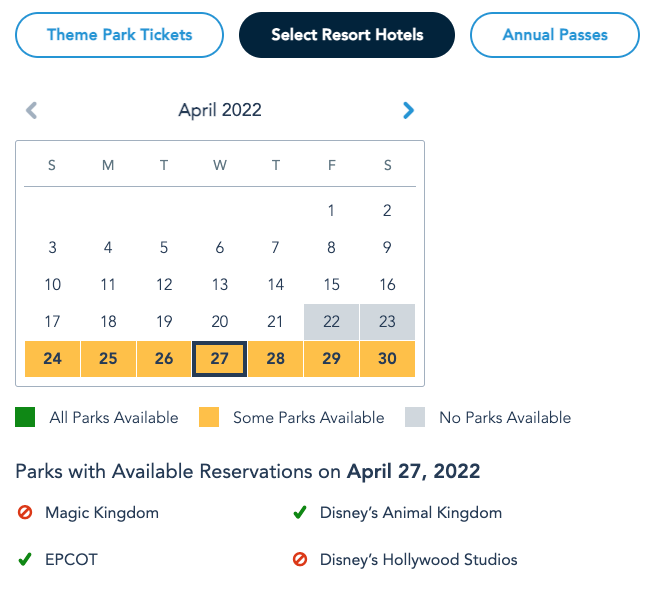 So, it looks like two Disney parks will be quite busy next week — both Hollywood Studios and Magic Kingdom are completely booked as of now! Of course, park pass availability is constantly changing as Disney goers update and change their plans, so be sure to keep checking for a reservation if you don’t find one right away. And, stay tuned to DFB for more park hours and reservation updates in the future!

Click here to see all of Disney World’s Hours for May and June!

Do you have park reservations booked for next week? Let us know in the comments!

The post The TWO Disney World Parks You Might Want to AVOID Next Week! first appeared on the disney food blog.